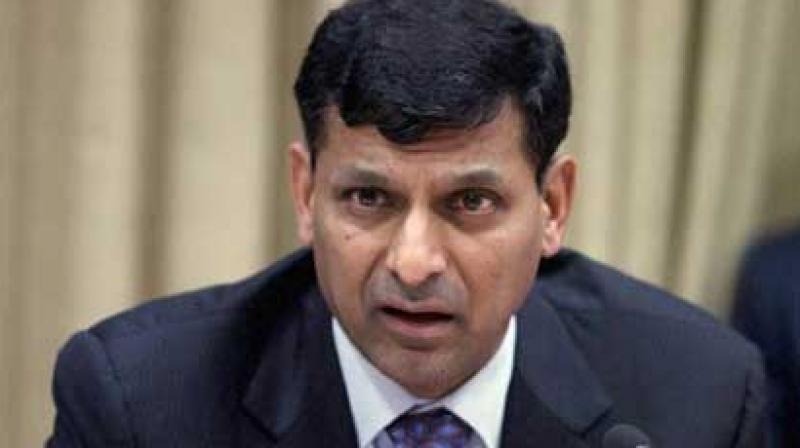 New Delhi: Days after GDP growth rate for the first quarter of 2018-19 was pegged at its highest in three years, Niti Aayog vice-chairman Rajiv Kumar on Monday blamed former RBI governor Raghuram Rajan for the slow down in the economy over the last three years.

Delinking the economic slump with demonetisation, Mr Kumar squarely lay all the blame for the successive fall in economic growth and rising NPAs on the former RBI governor, though he remained vague in his explanation.

“There is no evidence to show a direct link between demonetisation and the economic slowdown,” Mr Kumar said, calling it a “false narrative”.

“This is a false narrative. Leading people like P. Chidambaram and our former PM (Manmohan Singh) added to this,” he said.

“If you look at the statistics on growth rate in the post-demonetisation period, the growth rate came down not because of note ban but because there was a declining trend for the last six quarters. Starting from last quarter of 2015-16, the growth rate had come down for six successive quarters. There was a trend of declining growth, and why was growth declining? Growth was declining because of the rising non-performing assets or bad loans (NPAs) in the banking sector.

When this government came into office, those figures were about Rs 4 lakh crore. It rose to Rs 10.5 lakh crore by the middle of 2017. The NPA rose and the GDP growth rate declined because, under the previous governor (Raghuram) Rajan, they had instituted new mechanisms to identify stressed or non-performing assets and these continuously continued to grow, which is why the banking sector stopped giving credit to the industry,” Mr Kumar said while speaking to news agencies.

Mr Rajan, during his tenure as RBI governor, had identified major NPA accounts that were affecting the banking system, especially the finances of public sector banks. As a result of this, state-owned banks started streamlining lendings to such defaulters, which resulted in regulation of the entire lending process.

The Niti Aayog vice-chairman said that the industry, which drives the nation’s economy, was not getting money from the banks, leading to sluggishness in the market and decline in GDP growth rate.

“In fact in some cases, like the medium and small scale industries, their credit actually shrank. There was a negative growth in some years. And, then even to the large industries, the growth of credit came down to one per cent or 2.5 per cent and in some quarters even negative.”

“This has been the instance of historically the highest deleveraging of the commercial credit to the industries in India’s economic history. Never has there been seen such a consistent year-upon-year deleveraging of credit. This is the cause for the slowdown of the growth. And this is what has been compensated by the government by the ramping up of the public capital expenditure,” Mr Kumar said.

The “new mechanisms” introduced by the former RBI chief, which the Niti Aayog vice-chairman referred to, had come as a wake up call for banks, who became more cautious while offering loans, experts told this newspaper.

But saying that these very mechanisms led to banks stopping credit to the industry, which in turn led to declining growth rate and rising NPAs is too vague an explanation, an industry observer said.

The GDP growth rate had dipped to 5.7 per cent in what seems to have been the bottoming out of the economy. The latest GDP growth rate was attributed to the good quarterly performance to 13.5 per cent growth in the manufacturing sector and near 9 per cent in the construction sector.

The Economic Survey projected that Indian economy would achieve growth rate of 7-7.5 per cent during 2018-19.