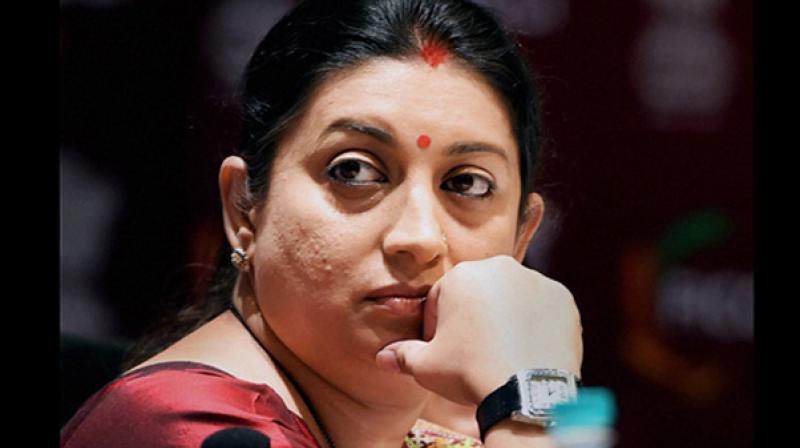 Textiles Minister Smriti Zubin Irani has announced that weavers will henceforth be able to avail a wide array of Government services from Weavers' Service Centres (WSCs).

New Delhi: The government on Sunday said weavers will be able to avail a wide range of government services like Aadhaar and PAN card from WSCs which is poised to become a one-stop-shop for them apart from rendering technical help.

"Textiles Minister Smriti Zubin Irani has announced that weavers will henceforth be able to avail a wide array of Government services from Weavers' Service Centres (WSCs)," the Ministry of Textiles said in a statement.

The weavers, the minister said, will also be able to pay their electricity bills and go for online courses at the WSCs.

"The Minister informed that the Ministry of Textiles will enter into an MoU tomorrow with Common Service Centres, which will enable WSCs to provide the aforementioned services, beginning from this year itself," it added.

There are 28 WSCs under the Office of Development Commissioner (Handlooms), Textiles Ministry, functioning in different parts of India, the statement added.

Weavers visit these WSCs frequently, in order to avail technical assistance in relation to their profession, it said.

The statement also contained a tweet of Irani which said that "On the eve of 3rd #NationalHandloomDay, inaugurated a camp for Weavers MUDRA & Hathkargha Samvardhan Sahayata Schemes at Bijoynagar in Assam".

Recalling Prime Minister Narendra Modi's words that the development of the North Eastern Region is imperative for the development of India, the minister informed the weavers that the main event of third National Handloom Day will be held in Guwahati, as per the statement.

The minister said that around 25 crore citizens have got their bank accounts opened under the Pradhan Mantri Jan Dhan Yojana in the last three years.

"Noting that seven banks are participating in the camp for distribution of loans today, Irani asked the women weavers how often banks come to them to provide banking services," the satement said.

Irani expressed her satisfaction that more than 250 women applied for MUDRA loans in just an hour after the camp started functioning. She said that handloom weavers in Sambalpur, Odisha, were able to improve their earnings by more than 60 per cent within three months of availing MUDRA loan.

The textiles minister distributed MUDRA loan sanction letters to 50 weavers on the occasion, and appealed to all weavers to apply for the loan and improve their income.