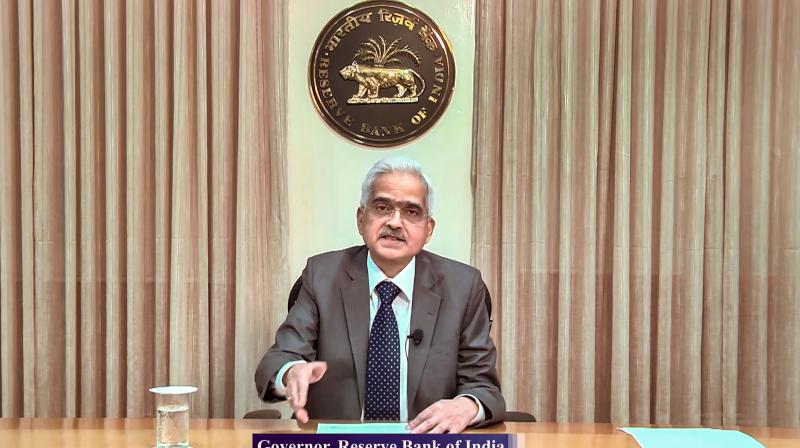 Mumbai: The Reserve Bank of India (RBI) on Wednesday hiked the policy repo rate by 50 basis points to 4.9 per cent and raised the inflation projection for the current financial year to 6.7 per cent.

RBI Governor Shaktikanta Das announced that the Monetary Policy Committee (MPC) has "voted unanimously to increase the policy repo rate by 50 basis points to 4.90 per cent, with immediate effect".

Consequently, the standing deposit facility (SDF) rate stands adjusted to 4.65 per cent and the marginal standing facility (MSF) rate and the Bank Rate to 5.15 per cent.

The MPC also decided unanimously to remain focused on the withdrawal of accommodation to ensure that inflation remains within the target going forward while supporting growth.

This is the second hike in the policy repo rate since the being of the current financial year.

Last month, in its off-cycle monetary policy review the central bank hiked policy repo rate by 40 basis points or 0.40 per cent to 4.4 per cent. This was the first increase in policy repo rate in nearly two years. The repo rate is the interest rate at which the RBI lends short-term funds to banks.

The upward revision in inflation projection comes as domestic retail inflation has remained above RBI's comfort level of 6 per cent for four months in a row, mainly due to the Russia-Ukraine war which has impacted the prices of commodities across the globe.

In the bi-monthly monetary policy, Das upped the inflation projection for the ongoing fiscal to 6.7 per cent.

Inflation is expected to come down to 6.2 per cent in December quarter (Q3) and further reduce to 5.8 per cent in March quarter (Q4) of this fiscal.

A rise in price across all items from fuel to vegetables and cooking oil pushed WPI or Wholesale Price Inflation to a record high of 15.08 per cent in April and retail inflation to a near eight-year high of 7.79 per cent.

RBI has the mandate to keep inflation at 4 per cent with a bias of 2 per cent on either side.

The Reserve Bank of India retained its growth projection at 7.2 per cent for the current fiscal on the back of improvement in urban demand and gradual recovery in rural India.

The RBI expects growth in the first quarter of the current fiscal at 16.2 per cent, which will taper to 4 per cent by the fourth quarter.

He, however, cautioned that there are risks from the ongoing Russia-Ukraine war.

The central bank earlier in April slashed the GDP growth projection for 2022-23 to 7.2 per cent from its earlier forecast of 7.8 per cent.

The GDP growth compares to an 8.7 per cent expansion in the previous 2021-22 fiscal.