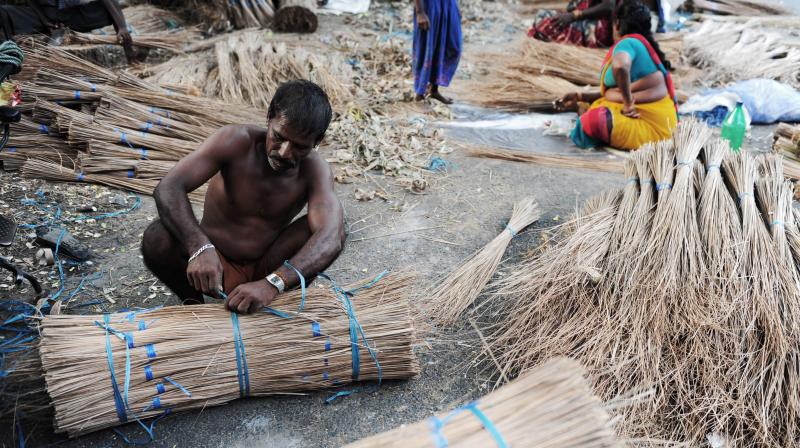 India's GDP growth for the current fiscal is expected to slow down to 4.8 per cent. (AFP Photo)

New Delhi: India's GDP growth for the current fiscal is expected to slow down to 4.8 per cent, a United Nations report has said, warning that the covid-19 pandemic is expected to result in significant adverse economic impacts globally.

The UN 'Economic and Social Survey of Asia and the Pacific (ESCAP) 2020: Towards sustainable economies' said that covid-19 is having far-reaching economic and social consequences for the region, with strong cross-border spillover effects through trade, tourism and financial linkages.

The report noted that these are very preliminary forecasts based on the data and information available up to March 10.

"As the covid-19 pandemic is still evolving rapidly and showing no signs of abating as of March 31, 2020, its negative impacts on economic performance of countries and territories in Asia and the Pacific will likely be very significant, a disclaimer accompanying the GDP chart for economies in the Asia and Pacific in the report says.

"India's economic growth declined considerably by more than the earlier estimate (5 per cent in 2019 compared with previous estimate of 7 per cent), as uncertainties ahead of the general election and tighter credit conditions weighed on manufacturing activities and investments. Weakness in income growth and a rising unemployment rate also undermined consumer sentiment. Its exports were affected by global trade tensions as well, while extreme weather events disrupted agricultural activities, the ESCAP report said.

The report noted that covid-19, first reported in China and subsequently globally, has significantly increased the downside risks to the Asia and Pacific region's near-term economic outlook.

"While the pandemic was initially expected to affect primarily China's economy (mostly in the first quarter of 2020), its spread worldwide, including in the Asia-Pacific region, could result in significant adverse economic impacts.

"High economic integration regionally and internationally could exacerbate the economic slowdown through multiple channels, such as trade, tourism and financial markets, it said.