Business   Economy  09 May 2020  US unemployment surges to a Depression-era level
Business, Economy

US unemployment surges to a Depression-era level

US Labor Department says that 20.5 million jobs vanished in April in the worst monthly loss on record triggered by shutdowns of businesses 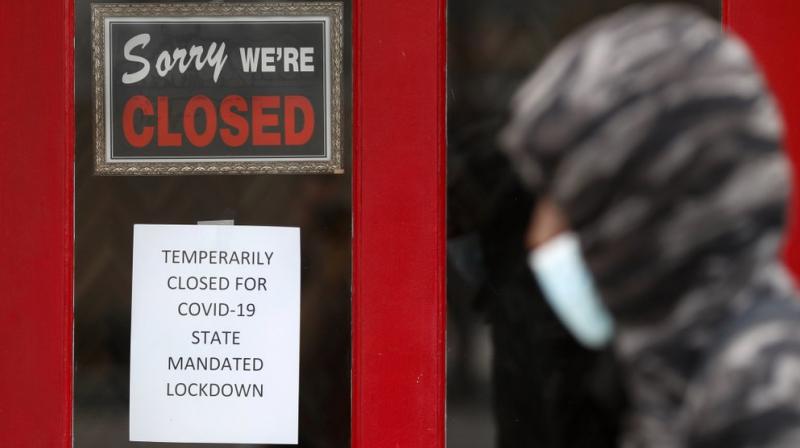 The U.S. unemployment rate hit 14.7% in April, the highest rate since the Great Depression, as 20.5 million jobs vanished in the worst monthly loss on record. The figures are stark evidence of the damage the coronavirus has done to a now-shattered economy. (AP)

Washington: The coronavirus crisis has sent U.S. unemployment surging to 14.7%, a level last seen when the country was in the throes of the Depression and president Franklin D Roosevelt was assuring Americans that the only thing to fear was fear itself.

And because of government errors and the particular way the Labor Department measures the job market, the true picture is even worse. By some calculations, the unemployment rate stands at 23.6%, not far from the Depression peak of nearly 25%.

The Labor Department said Friday that 20.5 million jobs vanished in April in the worst monthly loss on record, triggered by coast-to-coast shutdowns of factories, stores, offices and other businesses.

The breathtaking collapse is certain to intensify the push-pull across the US over how and when to ease stay-at-home restrictions. And it robs president Donald Trump of the ability to point to a strong economy as he runs for reelection.

“The jobs report from hell is here,” said Sal Guatieri, senior economist at BMO Capital Markets, “one never seen before and unlikely to be seen again barring another pandemic or meteor hitting the Earth.”

On Wall Street, stocks pushed higher as investors reckoned that the worst of the job losses are over. The Dow Jones Industrial Average gained more than 455 points, or close to 2%.

Worldwide, the virus has infected at least 3.9 million people and killed over 276,000, including more than 77,000 in the U.S., according to a tally by Johns Hopkins University based on official data. White House officials announced that vice president Mike Pence’s press secretary has the coronavirus, the second person at the complex known to test postive this week, and said safety protocols were being stepped up.

The unemployment report indicated that the vast majority of those laid off in April — roughly 75% — consider their job loss temporary, a result of businesses that were forced to close suddenly but hope to reopen and recall staffers.

Whether most of those workers can return anytime soon, though, will be determined by how well policymakers, businesses and the public deal with the health crisis. Economists worry it will take years to recover all the jobs lost.

The meltdown has occurred with startling speed. In February, unemployment was at a more than 50-year low of 3.5%, and the economy had added jobs every month for a record 9 1/2 years. In March, unemployment was 4.4%.

“In just two months the unemployment rate has gone from the lowest rate in 50 years to the highest rate in almost 90 years,” said Gus Faucher, chief economist at PNC Financial.

Nearly all the job growth achieved during the 11-year recovery from the financial meltdown has now been lost in one month.

Leslie Calhoun lost his job cleaning casinos after 20 years. He, his wife, their two daughters and his sister-in-law are surviving on his wife’s paycheck from a medical facility as he wrestles with an unemployment system that has paid him nothing since he applied in March.

“The bills are piling up,” he said. “We’re eating a lot of ramen noodles and hot dogs. What I wouldn’t give for a nice meal of baked chicken and steak, some fresh vegetables.”

The last time unemployment was this high was in 1939 at the tail end of the Depression, before the U.S. entered World War II.

Trump, who faces the prospect of high unemployment rates through the November election, said the figures were “no surprise” and later added that he’s in “no rush” to negotiate another financial rescue bill.

An emerging Democratic aid package is expected to include eye-popping sums, centered on nearly $1 trillion that states and cities are seeking to prevent mass layoffs as governments reel from the one-two punch of skyrocketing pandemic costs and dismal tax receipts in the shuttered economy.

The nonpartisan Congressional Budget Office has projected that the jobless rate will still be 9.5% by the end of 2021.

As bad as Friday’s numbers were, they don’t capture the full magnitude of the devastation.

In a sort of footnote, the Labor Department acknowledged that its survey-takers erroneously classified millions of Americans as employed in April even though their employers had closed down. If they had been counted correctly, unemployment would have been nearly 20%, the government said.

However, the Labor Department doesn’t change the results submitted by its survey-takers because that could be seen as political manipulation.

Also, people who are out of work but aren’t actually looking for a new job are not officially counted as unemployed. An estimated 6.4 million people fit that description last month, probably because they saw little prospect of finding work given the shutdowns.

Counting them as unemployed would push the rate up further, to almost 24%, according to calculations by economist Heidi Shierholz of the Economic Policy Institute.

Though some businesses are beginning to reopen in certain states, factories, hotels, restaurants, resorts, sporting venues, movie theaters and many small businesses are still largely shuttered. The government is dispensing nearly $3 trillion to help households and businesses pull through, including $1,200-per-person relief checks and an extra $600 in weekly unemployment benefits.

Trump has pushed aggressively to get businesses up and running again amid warnings from health experts that easing up too soon could lead to a deadly second wave of infections.

Critics of the coronavirus response have included Dr. Rick Bright, who was ousted from a government research agency after raising concerns overuse of an unproven drug that Trump touted as a remedy for COVID-19. Federal investigators found “reasonable grounds” that he was punished for speaking out and should be reinstated, his lawyers said.

As Election Day nears, the president will be judged on how he handles not just the economic crisis but the health one.

Just months ago, the Trump campaign planned to hammer its Democratic opponent this spring with negative ads while touting the strong economy. But since the outbreak, the re-election team has grown increasingly worried about Trump’s standing in key states such as Michigan, Wisconsin and Florida. More than one-fifth of Michigan’s workers are on unemployment.

Former vice president Joe Biden, meanwhile, has seized on the crisis as part of his overall attempt to cast Trump as caring only about the wealthiest Americans.

In Europe, this week the Bank of England projected that Britain will see its biggest annual economic decline since 1706. Unemployment in the 19-country eurozone is expected to surpass 10% in coming months as more people are laid off. That figure is expected to remain lower than the U.S. rate, in part because millions of workers in places such as France and Germany are staying on payrolls with the help of government aid that covers much of their salaries.

Over the past seven weeks, an estimated 33.5 million Americans have filed for unemployment benefits. Friday’s job-loss report is based on a mid-April survey of businesses and households and takes into account the hiring surge at companies like Amazon and many grocery stores.

Minorities and poor people have suffered the most from the shutdown. Job losses were especially severe among Latinos, whose unemployment rate leaped to 18.9% from 6% in March. The African-American rate jumped to 16.7%, while for whites it rose to 14.2%.