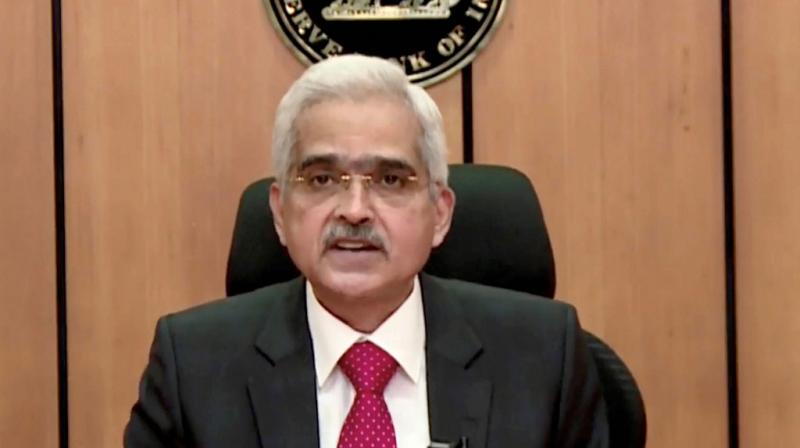 Mumbai: The Reserve Bank of India (RBI) left key interest rates unchanged on Friday but signalled more easing ahead to support an economy that it sees contracting 9.5 per cent in the current fiscal.

The six-member Monetary Policy Committee, with three newly inducted external members, voted unanimously to retain the benchmark repurchase or repo rate at 4 per cent while keeping its policy stance accommodative, implying it could ease again.

The central bank had slashed the repo rate by 115 basis points since late March to support growth.

RBI Governor Shaktikanta Das said the economic growth, which slumped to a negative 23.9 per cent in the April-June quarter, will turn positive only in the final January-March quarter.

"By all indications, the deep contractions of Q1 2020-21 (April-June) are behind us; silver linings are visible in the flattening of the active case load curve across the country," he said.

Barring the risk of a second wave of infections, the economy appeared poised to begin a recovery, he said, noting food grain production was set for record highs and factories and cities were coming back to life.

With macro indicators pointing to a recovery, "GDP growth may break out of contraction and turn positive by Q4 (January-March)," he said.

"For the year 2020-21 as a whole, therefore, real GDP is expected to decline by 9.5 per cent, with risks tilted to the downside," he said, adding that if the current momentum of upturn gains ground, a faster and stronger rebound is eminently feasible.

"Against all odds, we shall strive and revive," he said.

In a video live stream, he said RBI will "continue with the accommodative stance of monetary policy as long as necessary  at least during the current financial year and into the next year  to revive growth on a durable basis and mitigate the impact of COVID-19, while ensuring that inflation remains within the target going forward".

RBI saw inflation easing close to the targeted band of 4 per cent, plus or minus 2 per cent, in the fourth-quarter ending March.

Stating that RBI stands ready to take further measures on liquidity, Das announced Rs 1 lakh crore of targeted long-term funds with tenors of as much as 3 years from the central bank to banks for investing only in corporate bonds, aimed at easing cash crunch at firms.

RBI will buy bonds issued by state governments as a special case and also extended till March 31, 2022, its permission to banks to hold more government bonds without marking to market.

For exporters hit by the pandemic, the RBI discontinued the system-based automatic caution-listing to allow them to realise export proceeds.

In order to facilitate swift and seamless payments in real-time for domestic businesses and institutions, RBI decided to make available the RTGS (Real Time Gross Settlement) system round-the-clock on all days from December.

In December last year, RBI had made available the National Electronic Fund Transfer (NEFT) system on a 24x7x365 basis.