Govt: It may not be appropriate to compare the IIP in the post-pandemic months with the IIP for months preceding the COVID-19 pandemic 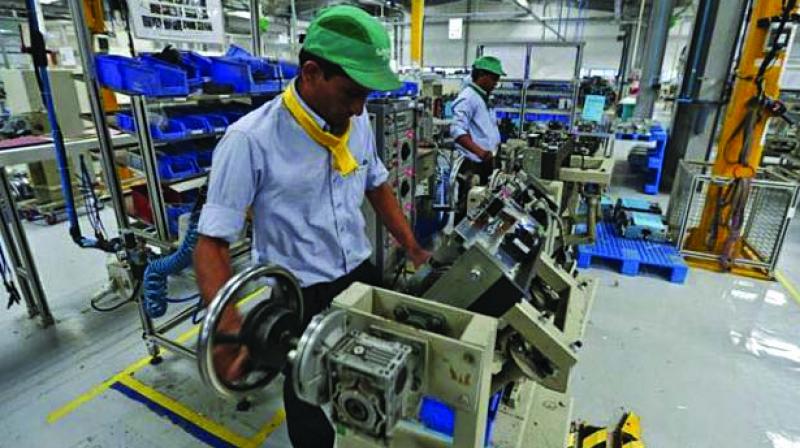 New Delhi: Industrial production declined by 16.6 per cent in June, mainly due to lower output of manufacturing, mining and power generation, as per the government data released on Tuesday.

According to the Index of Industrial Production (IIP) data, manufacturing sector production registered a decline of 17.1 per cent, while the output of mining and power fell 19.8 per cent and 10 per cent, respectively.

In a press release, the Ministry of Statistics and Programme Implementation issued a disclaimer saying that "it may not be appropriate to compare the IIP in the post-pandemic months with the IIP for months preceding the COVID-19 pandemic".

However, on a monthly basis, the Index of Industrial Production has shown improvement. The index, which was 53.6 in April, improved to 89.5 in May and 107.8 in June, the data revealed.

The data further revealed that the contraction in the consumer durables and capital goods segment was 35.5 per cent and 36.9 per cent, respectively during June 2020.

However, consumer non-durables segment posted a growth of 14 per cent.

The IIP for April-June period has contracted by 35.9 per cent, according to the data. It had registered a growth of 3 per cent during the same period last fiscal.

In view of the preventive measures and announcement of a nationwide lockdown by the government to contain the spread of COVID-19 pandemic, a large number of industrial sector establishments were not operating from March-end, 2020 onwards.

This has had an impact on the items being produced by the establishments during the period of lockdown. With the lifting of restrictions in the subsequent periods, industrial activity is now resuming.