Business   Economy  13 Jun 2017  Nobody will be at a disadvantage under GST: Drabu
Business, Economy

Nobody will be at a disadvantage under GST: Drabu 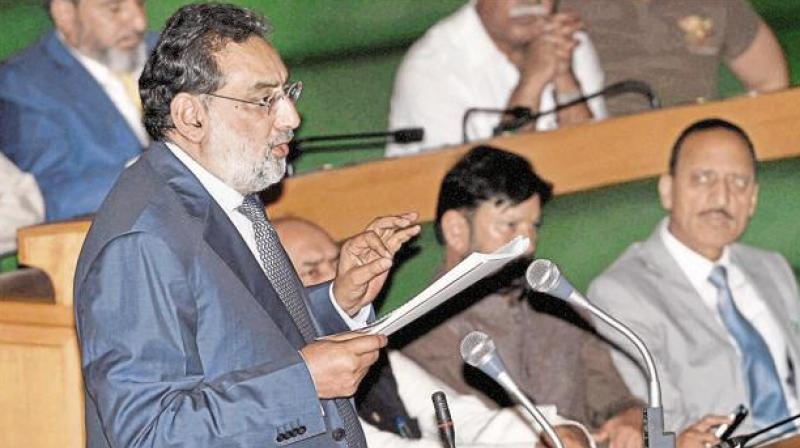 Srinagar: Allaying apprehensions of the opposition and business community, the J&K government has said it would not compromise fiscal autonomy of the state and no one would be put at a disadvantage under the new GST regime.

"We have made changes in federal relations with the Government of India. Other states draw powers to tax from the Constitution of India while we draw our powers from our own Constitution. Those legislative powers have not been compromised, so there is no question of compromising fiscal autonomy," finance minister Haseeb Drabu said, addressing a meeting here.

Last month, the business community in Kashmir had said that it is not against the Goods and Services Tax (GST) but threatened a 'never-before' kind of agitation if the new tax regime affected the special status of the state for GST rollout.

Opposition National Conference met Jammu and Kashmir governor N N Vohra on June 9 and apprised him about the party's apprehensions on the extension of Constitutional Amendment 101 to the state to facilitate the extension of the GST, saying "such a plan will have wider and irreversibly adverse ramifications on the state's fiscal autonomy and will impinge upon the residuary powers enjoyed by the state.

"The opposition also sought deferment of the special session of the state legislature beginning June 17 and sought an all-party meeting to allay the fears and concerns of the "various parties and putting the entire concept in public domain so that there is an open debate with the stakeholders".

The finance minister said it is for the first time in the history of Jammu and Kashmir that a constitutional amendment was required to extend a Central law to the state which will be debated in the State Assembly.

"People of J&K must understand what is at stake, which is why we are holding a special assembly session," he said adding, the state government has set precedent of discussing policy issues with stakeholders and in the assembly where people send their leaders to take decisions which impact their lives.

"Article 370 is safe and modalities are safe. You should recognize that we are setting a precedent. If anything, it is my understanding that the union is sharing sovereignty with the states, in the taxation space," he said.

The finance minister said "we can defer the GST implementation but it will impact the business of Kashmir more than the government. In the absence of GST in J&K, no one would want to trade with us. And if they do trade, the consumer will be penalised through double taxation. Let me assure you that no one will be put at a disadvantage under the GST regime. In fact, J&K will be the first state to do GST refund for shoppers on handicrafts."

He added that GST is running successfully in 198 countries.

"Let me assure you that there can be no better system for traders than GST. Besides, the system of exemptions will also continue in J&K. Modalities will be worked out in coming days as there is uncertainty all across India and J&K is not unique to it over internet and other operational issues which will have to be resolved," Drabu said.

Drabu said that businesses of Jammu and Kashmir would be affected if GST is not extended to the State, "It is a federal tax where J&K will be a participant. In
absence of GST, there will be two taxes which will hike the costs and impact the consumers. Trade will be hampered and no one will be willing to do business in J&K," he said.

Drabu said the implementation of GST is being discussed since 2002 and the law has evolved over the years. "Earlier, GST was supposed to be a single rate, single tax with no GST Council. Today, not one decision has been taken without the consultation of other states which is why I have repeatedly said that GST council is India's first truly federal institution," he said.

He also said that GST would ease businesses as inspection audits will fade away and assessments will be done by traders. "States have huge powers today. Our government has done nothing in the Constitutional Amendment which takes away the legislative powers of J&K," he said.