Meanwhile, the IIP for the month of August went up to 11.9 per cent 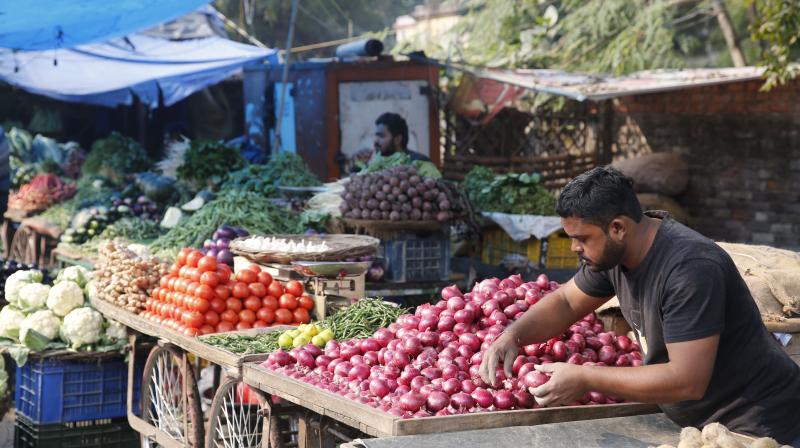 The data by the National Statistical Office (NSO) showed that the retail inflation rate last month was the lowest print since April 2021. (Photo: AP/File)

New Delhi: Staying within the Reserve Bank of India's tolerance band of 2-6 per cent for the third consecutive month, India's retail inflation fell to a five-month low of 4.35 per cent in September from 5.3 per cent in August, while the Index of Industrial Production (IIP) for August surged 11.9 per cent, according to the government data released on Tuesday.

The data by the National Statistical Office (NSO) showed that the retail inflation rate last month was the lowest print since April 2021. "The Septem-ber retail inflation cooled at a satisfactory level, mainly on account of softening food prices. The consumer food price inflation for the month of September stood at 0.68 per cent, compared with 3.11 per cent in August," the data showed.

As for food prices, the data further showed that vegetables registered a de-growth of -22 per centand the food and beverages segment grew 1.01 per cent. Food inflation is on a continuous decline and further eased to 0.68 per cent in September from 3.11 per cent in August. But inflation in the fuel and light category remained elevated at 13.63 per cent.

Meanwhile, the IIP for the month of August went up to 11.9 per cent. The index was up 11.5 per cent in July, the data from the Ministry of Statistics and Programme Implemen-tation showed.

Industrial production has been surging for the past few months, mainly due to the low-base of last year. "The mining output during the August month grew by 23.6 per cent, while manufacturing sector surged 9.7 per cent. At the same time, the electricity generation in August grew 16 per cent," the data showed.

Rajani Sinha, chief economist and national director-research, Knight Frank India, said, “The growth in IIP in August is mainly because of the base effect, while on a sequential basis  the index has not shown much movement compared to the previous month. IIP is still showing a contraction of around 5 per cent if we compare it to the pre-Covid levels of August 2019. However, in the next few months with the economic activities moving towards normalcy, the IIP is expected to improve as being reflected by many other high frequency economic indicators.”