Retail inflation rises to 7.35 per cent, highest in 5 yrs 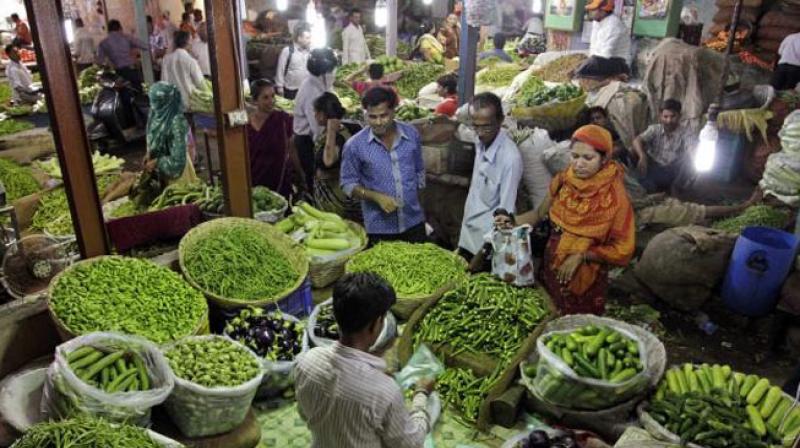 The NSO data shows inflation in pulses/vegetable product was recorded at 15.44 per cent, while in case of meat and fish it was nearly 10 per cent.

New Delhi: Consumers across India have reason to worry over household budgets as retail inflation for December 2019 sharply spiked to a five-and-a-half-year high of 7.35 per cent, up from 5.54 per cent a month ago, after a surge in food prices and telecom tariff hikes.

This has triggered further growth concerns amid a slowing economy. It is the highest retail inflation rate since 7.39 per cent seen in July 2014, months after the Narendra Modi government assumed office.

In line with projections by the Reserve Bank at its December monetary policy meet, economic growth is likely to weaken going ahead on higher inflation expectations, and surprisingly the current inflation data has already breached the RBI’s upper limit target — keeping inflation in the range of 4 per cent with a margin of 2 per cent on either side.

The Consumer Price Inflation data released by the National Statistical Office (NSO) indicated inflation has further jumped to a significant level from November 2019, when it had hit a 40-month high of 5.54 per cent.

While core inflation has risen marginally in December to 3.7 per cent, the real worry for the government and the RBI is the rate of food/vegetable inflation, mostly due to the rise in onion prices, which is the key trigger behind the steep rise in inflation in December 2019.

The NSO data shows inflation in pulses/vegetable product was recorded at 15.44 per cent, while in case of meat and fish it was nearly 10 per cent. “The food inflation has jumped significantly to 14.12 per cent from 10.01 per cent in November 2019. It is worth mentioning vegetable inflation rose to 60.5 per cent in December, compared to 36 per cent in November,” the data indicated.

However, economists feel that the CPI at 7.5 per cent almost broke the ceiling, going beyond the RBI’s tolerance limit of six per cent and fully reflecting the recent uptrend in food and vegetable prices.

“The circumstances around likely fiscal slippages may have an adverse impact on interest rates, the inflation level would add to these worries in the immediate term,” said Dr Joseph Thomas, head of research at Emkay Wealth Management, adding that fruit and vegetable prices may come down as these crops have short cultivation cycles, but the rise in prices of pulses may stay on for more time.

Nikhil Gupta, chief economist at Motilal Oswal Financial Services, has a different view, saying: “Although it may be an over-exaggeration to call India in stagflation where growth is still less than four per cent, the debate over rate hikes may get serious.”

“In particular, prices of pulses may remain elevated in the coming months, despite the favorable outlook for the rabi crop. Stickiness in prices of protein items may provide a floor to food inflation, even once vegetable prices correct to seasonally appropriate levels,” said Aditi Nayar, principal economist at ICRA.