GST teething issues will be solved in three-four months: Badal

Sector will have USD 10 billion investment in the next couple of years if there is flexibility in FDI. 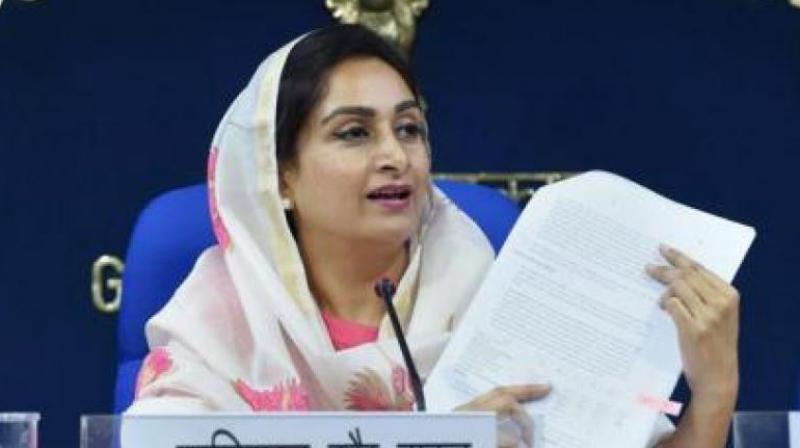 Mumbai: The GST glitches faced by the domestic food processing industry are only "teething issues" and are expected to be sorted out in the next 3-4 months, Union Minister Harsimrat Kaur Badal said on Thursday.

Badal, the Minister for Food Processing Industries, also made a pitch for greater flexibility in the foreign direct investment for homecare products to make it more attractive for the investors.

"The GST (Goods and Services Tax) is no doubt one of the biggest economic reforms. It is having its teething issues. In the next 3-4 months, these issues will be settled down," the minister told reporters on the sidelines of 12th edition of Annapoorna World of Food India Exhibition and Conference, hosted by the industry body Ficci here.

She said there has been a 40 per cent increase in investment in the food processing industry from the last year, adding "big companies like Amazon, Grofers, Metro and Big Basket are putting in investment in next three years."

There is no doubt that if a little bit of flexibility in FDI policy is given, particularly for homecare products, it will boost the investment in the sector, Badal said.

The government had in February 2016 allowed 100 per cent FDI in locally-produced and manufactured food products.

The minister said that world-over the model is `food plus homecare products' because margins on food products are relatively very small.

"So when you put up the infrastructure but you can't meet the cost...which is why the industry has been saying that it should be allowed to keep homecare products as well," she said.

Badal said she already had a meeting with the new Commerce and Industry Minister Suresh Prabhu on the issue, adding "I am hoping for a decision shortly."

"The sector will have USD 10 billion investment in the next couple of years if there is flexibility in FDI," she said.

The minister said the government has approved a Rs 6,000 crore central scheme, `SAMPADA', for the 2016-20 period, which aims at boosting processing of marine and agriculture produce, and it can leverage investments to the tune of Rs 31,000 crore.

The scheme is expected to benefit 20 lakh farmers and generate little over 5.30 lakh direct and indirect employment in the country by 2019-20. It is shocking that the country processes only 10 per cent of the food it produces, unlike some countries which process up to 80 per cent of domestically produced food, she said, and added that India needs to triple the food processing proportion. Countries such as the UAE and Japan are keen to source from India for food processing, she said.

Badal also said that out of 42 mega food parks planned in the country, nine are operational today and a 10th, coming up in Maharashtra, is expected to be up and functional next month. The number of operating food parks would go up to 12 by this year end, she added.