Business   Economy  14 Sep 2017  Why Modi, Abe's bullet train project is a win-win for both India and Japan
Business, Economy

Why Modi, Abe's bullet train project is a win-win for both India and Japan 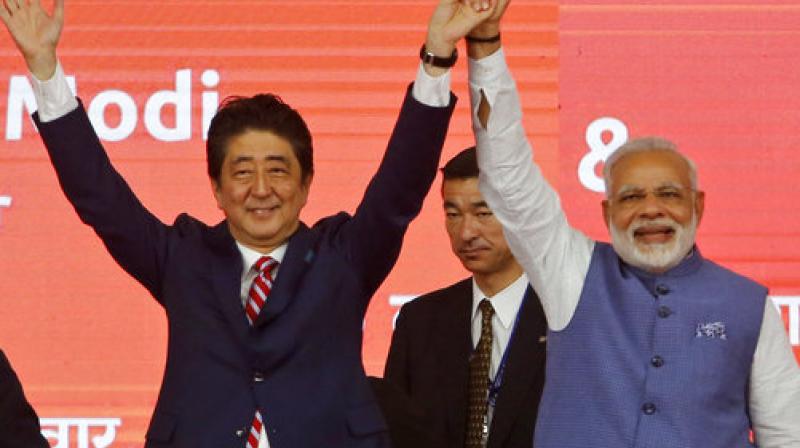 Both India and Japan stand to gain equally from the bullet train project. Photo: AP

Mumbai: With the pompous inauguration of the 508-km Mumbai to Ahmedabad bullet train project, India became the second country, to import the Japanese 'Shinkansen' bullet-train technology which has been lobbying for a buyer for long.

At a time when Japan and China are locked in an intense rivalry for providing this technology to countries around the world, Japan’s Rs 88,000 crore-soft loan to India will cement a long-standing friendship between the two countries. Abe, in his address at the inauguration ceremony in Ahmedabad on Thursday emphasized on the “special bond” between the two countries” and Modi thanked him saying Japan’s loan was a “gift” to India.

Japan’s victory in securing the Indian contract must been seen against the edgy competition from Siemens AG, Bombardier Inc., Alstom and, more recently, the Chinese CRRC in a global market worth USD 133 billion by 2019, according to a BCC Research.

"The competition between China and Japan, especially in the ASEAN region, has been fairly intense and in India, there will be more competition for other phases of the bullet train project," said Jaideep Ghosh, partner and head of transport at consultancy KPMG told Bloomberg.

The financing by Japan would also bring in business for Japanese firms like Hitachi Ltd. and East Japan Railway Co. – a blow for CRRC and European companies including Alstom SA.

Also, India is not the only buyer of this bullet-train technology. China won a USD 5.5 billion project in Indonesia in 2015 and is currently vying with Japan for a Singapore-Kuala Lumpur link.

US President Donald Trump had also called for introduction of high-speed rail technology in his country, a technology he said is “all over the place” in Japan and China.

According to a report in Bloomberg, in 2014, Japan’s government had offered its technology to the then California governor, Arnold Schwarzenegger, as part of a USD 40 billion project. In 2014, the Japanese prime minister had said his government may partially finance the Central Japan Railway Co.'s maglev trains for a Washington-Baltimore line.

The Japanese team estimated that the first train would roll out by 2023, but Railways Minister Piyush Goyal said PM Modi wants the train to start on 15 August 2022 - when India completes 75 years of Independence. The loan to Japan will have to be repaid over 50 years.

The high-speed train, with a capacity to accommodate 750 people, is expected to slash travel time between Mumbai and Ahmedabad from seven to three hours.

Amidst criticism from the Opposition that this national project is being turned into a political one, the Modi government has claimed that it will generate employment for nearly 20,000 people.