Business   Economy  15 May 2020  One Nation One Ration Card: Manna for migrant workers -- by next March
Business, Economy

One Nation One Ration Card: Manna for migrant workers -- by next March 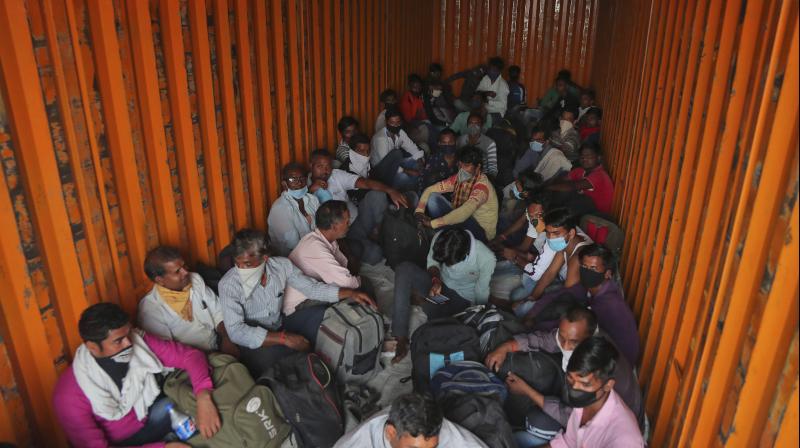 Migrant workers from UP state sit stuffed inside a goods truck on the outskirts of Hyderabad hoping to be driven to their villages in UP. (AP)

The government has given the lion’s share of assistance in the second tranche to farmers by offering Rs 2 lakh crore concessional credit to 2.5 crore farmers through the Kisan Credit Card. Apart from this, the minister approved an additional Rs 30,000 crore for the emergency working capital fund through Nabard, which is over and above the Rs 90,000 crore provided through normal refinance route.

The government would provide a working capital loan of Rs 10,000 each to 50 lakh street vendors who have been hit hard by the Covid-19 pandemic. She also announced a 2 per cent interest subsidy for Shishu loans given under Mudra lending.

In big relief to migrant workers, Sitharaman also announced the launch of the National Portability Cards -- One Nation, One Ration Card -- which can be used in any ration shop in any part of the country as migrants move from state to state. However, she said this scheme would be implemented across India by March next year.

The government, Sitharaman said, would provide free foodgrains to all migrants for the next two months. “They will be given five kg of wheat or rice per individual, one kg of pulse, one kg of (chana) even if a migrant worker does not have a BPL card. This scheme is going to cost the government exchequer worth Rs 3,500 crore. This will reach through the state governments who will be the implementing agencies,” she said.

Sitharaman has also announced a new affordable rental housing scheme for migrant workers under the Public-Private Partnership (PPP) model. "This will be implemented through the PM Awas Yojana. New housing complexes could be developed by private players, whom the government will incentivise," Sitharaman said.

In an attempt to give a fillip to the housing sector and other allied industries, the government has extended interest subsidy by another year — till March 2021 — to the purchase of flats in the affordable housing segment by spending Rs 70,000 crore.

Under the scheme, government-funded housing in the cities will be converted into Affordable Rental Housing Complexes (ARHCs) under the PPP mode through concessionaires. The new scheme will incentivise companies to develop such complexes on their private land.

She has also approved a package worth Rs 6,000 crore as Campa Fund to give employment for tribal people, especially for Adivasis involved in forestry-related work.