Average wholesale price of onion in Nasik was ruling at Rs 20 per kg early this month. 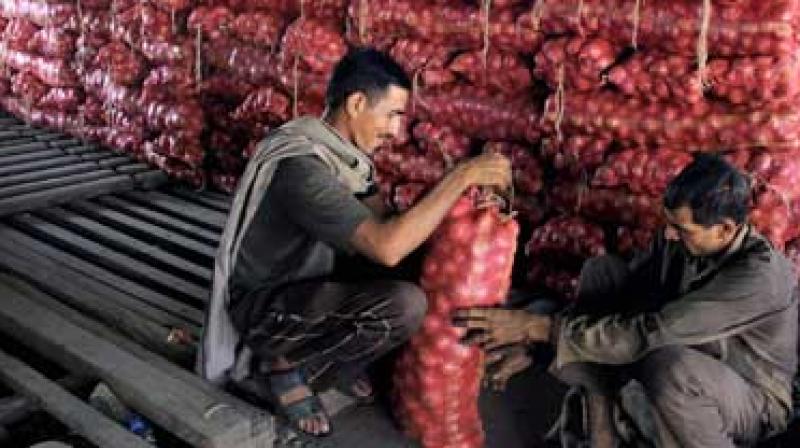 Wholesale rates in other onion markets in Maharashtra have also fallen. (Photo: File/PTI)

Nasik: Six out of 16 wholesale mandis here have been shut for onion trading after a sudden steep fall in prices to Rs 11/kg, the district administration said on Friday. The average wholesale price of onion in Nasik, which was ruling at Rs 20/kg early this month, has now declined to Rs 11/kg, as per official data.

Wholesale rates in other onion markets in Maharashtra have also fallen. In Lasalgaon, Asian's biggest wholesale market for onion, rates were ruling at Rs 15/kg today. "We have closed trading in six mandis since yesterday and they will open on Monday. Other 10 mandis are open. The mandis are closed due to sudden onion price fall," Deputy District Registrar of Cooperative Society Nilkanth Kare told PTI.

Onion prices started falling sharply since yesterday. "The exact reasons are still not known. It is believed the prices fell on reports of income tax raids on onion traders and also because of rise in onion imports," he said.

On a daily basis, onion arrival in mandis is about 20,000 tonnes. Onion prices had touched the peak of Rs 25/kg few weeks back and now have come down to Rs 10-11/kg, he added.

Kare mentioned that the onion being sold in Nasik mandis at present are of stored ones of last year's crop. The new kharif crop is yet to arrive. The cooperative society regulates wholesale mandis in the district.

It may be noted that wholesale onion prices in Maharashtra, the biggest growing state in the country, had shot up sharply in the last one month due to speculation despite new crop expected to be good. Due to which, the retail price had also gone up in most parts of the country.

To control consumer price, the government asked private traders to undertake onion import and so far 11,400 tonnes have been shipped.