Tax receipts were about $7.8 billion in July, a little over half the monthly target. 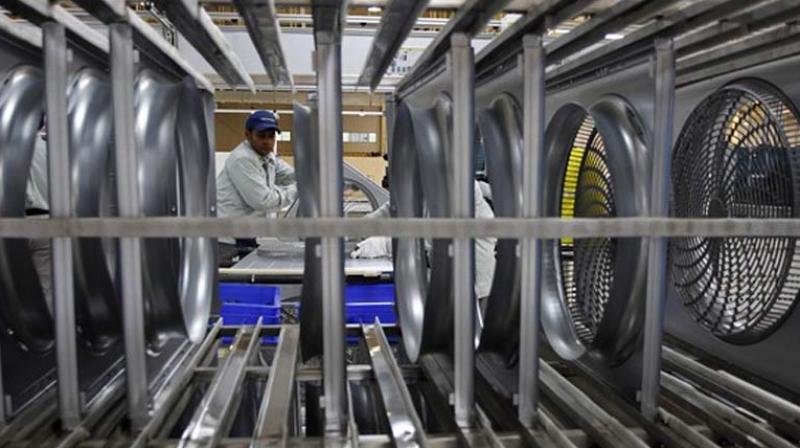 However, India's GDP is expected to climb up with the rise in number of young workforce. (Photo: Representational/AP)

New Delhi: India could be forced to cut spending on key infrastructure such as railways and highways as lower-than-expected tax collections and sluggish growth have upset the government’s budget calculations, two finance ministry officials said.

Tax receipts were about $7.8 billion in July - a little over half the monthly target - mostly because millions of firms failed to comply with the new Goods and Services Tax (GST) system that harmonises all state and central sales taxes but is still a work in progress.

The big worry is that economic growth, which slipped to a three-year low in the last quarter, could take a further hit if the public spending that largely underpinned expansion were to be slashed.

“There is a concern over lower tax collections,” a senior finance ministry official said.

The revenue shortfall could be at least 800 billion rupees ($12.5 billion) if the current trend continues until the end of the year, a second official said, forcing a re-think in government spending.

He said receipts from individual and corporate income tax may slightly overshoot the target of 9.8 trillion rupees ($152.8 billion) for the whole year, partly due to a crackdown on tax evaders. And in coming months, GST collections may pick up.

Both officials spoke on condition of anonymity.

Without spending cuts, the second official said, the fiscal deficit could slip to 3.5 percent of GDP, from the target of 3.2 percent that Prime Minister Narendra Modi’s government has set for 2017/18.

The main problem has been the introduction of the GST, billed as India’s biggest tax reform in 70 years.

Ambiguous rules, an onerous return filing system and glitches with its IT back-end have made doing business far more complicated for many companies. Frequent changes in tax rates after the GST’s launch have heightened business uncertainty, resulting in many firms failing to register for the new tax.

Manpreet Singh Badal, finance minister of Punjab, told Reuters the new tax was launched in a “hurry resulting in a lot of chaos and pandemonium”.

Punjab, for example, had suffered a revenue shortfall of about 8 billion rupees in the first month of its launch, he said as the textile, engineering goods and other small industries were hit. The state expects to raise near 395 billion rupees ($6.17 billion) in tax in 2017/18.

Under a GST deal, the central government has to compensate states if their receipts fall below an annual growth of 14 percent in taxes for the next five years.

India’s GDP growth itself has slowed to 5.7 percent in the April-June quarter from 7.9 percent a year earlier, a slowdown also partly blamed on the introduction of the GST, adding to the pressure on the state coffers.

Dividends from state-run companies are expected to fall and a $11 billion share sale programme is slowing down.

“If the revenues remain below target, then the government could cut spending on railways and road transport,” the second finance ministry official said.

Aiming to boost growth, Finance Minister Arun Jaitley increased budgetary allocations for the railways by one-fifth to 550 billion rupees and by 24 percent for highways development to 649 billion rupees this fiscal year from a year ago.

Complicating the finance ministry’s budget arithmetic further, the Reserve Bank of India announced last month that its annual surplus, a dividend transferred by the central bank to the government each year, would be only $4.9 billion, less than half the initial estimate, largely due to costs of Modi’s shock “demonetisation” initiative last year.

“This is an abnormal year. A shortfall in tax and non-tax revenue could give a shock,” said N.R. Bhanumurthy, an economist at the National Institute of Public Finance and Policy, a Delhi-based think-tank funded by the finance ministry.

He said the economy was still recovering from Modi’s move to withdraw 86 percent of high value banknotes as part of a fight against graft.

A finance ministry spokesman said tax receipts were expected to improve as problems related to the new GST system and the technology underpinning it were tackled.

In his annual budget presented in February, finance minister Jaitley had projected a 17 percent growth in tax collections, while estimating spending of nearly $335.05 billion in the current fiscal year.

Jaitley also has to set aside funds for India’s stressed state-run banks, which need nearly $60 billion in extra capital to meet new international banking rules by March 2019 according to Fitch Ratings estimates.

Balancing those demands while trying to control the fiscal deficit would involve a cut in public spending, analysts said.

Soumya Kanti Ghosh, chief economist at State Bank of India, said in a research note this month that first-quarter economic growth was supported by higher state spending, but the need to rein in the fiscal deficit could force the government to cut expenditure.