The foundation has been laid and transformation has begun with reforms like GST, IBC said Niti Aayog V-C Rajiv Kumar. 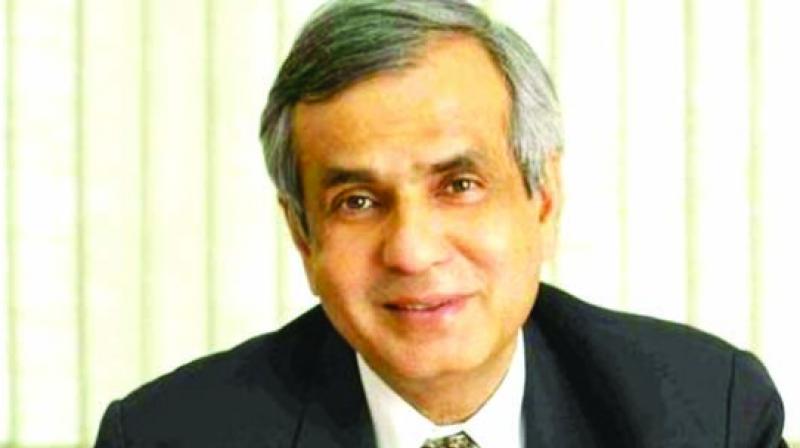 This budget is a paradigm shift in saying that we will achieve accelerated growth and job generation but with the primacy of private investment. That is what our focus is - that will then generate the jobs, said Niti Aayog Vice-Chairman Rajiv Kumar. (Photo: File)

New York: India will achieve a GDP growth of 8 per cent plus from fiscal year 2020-2021 onwards as the structural reform measures like the GST are set to yield the intended benefits, NITI Aayog Vice-Chairman Rajiv Kumar has said.

The eminent economist was in the city for the High-Level Political Forum Ministerial Meeting on Sustainable Development Goals at the United Nations Headquarters. During the visit, he delivered the keynote address at the 'India Investment Seminar' held at the Consulate General of India, New York.

Kumar stressed that in the next five years, the Modi government is focussed on accelerating growth from the current about 7 per cent to more than 8 per cent that will propel the country to easily achieving the target of becoming a 5 trillion dollar economy.

"I personally think that in the fiscal year 2020-2021 onwards, we will achieve higher than 8 per cent growth, (continuing) then for the next many years. It is just a fact of (growth) taking off," Kumar told PTI in an exclusive interview.

"The foundation has been laid and the transformation has begun with the passing of structural reforms like the Goods and Services Tax, Insolvency and Bankruptcy Code. These have taken their time to settle down and now they'll produce the benefits," Kumar said.

"We have the potential to grow at double-digit growth rates," he said.

On the issue of job creation, Kumar emphasised that a very large number of jobs have been generated in the country in the last five years.

"If it was always a jobless growth, then that would have shown up in social strife and social tensions and surely would have meant that this government would not have been re-elected," he said, adding that the re-election of Prime Minister Narendra Modi-led government shows that there is a level of satisfaction with the government's performance.

He, however, acknowledged that the nature and quality of jobs are not meeting the aspirations of the country's young people and they want better quality jobs that will engage them fully.

"That has to be ensured by us improving the investment climate for domestic investors as well as foreign direct investors."

Kumar highlighted that the Union Budget, presented earlier this month, has taken big steps forward for facilitating and further improving ease of doing business by liberalising the inflows of the FDI.

"This budget is a paradigm shift in saying that we will achieve accelerated growth and job generation but with the primacy of private investment. That is what our focus is - that will then generate the jobs."

Underscoring the potential in the agriculture sector, which has 43 per cent of the workforce, Kumar said investment in the agro-processing sectors and improvement in agricultural yields will help exponentially in job creation.

"Our agriculture, when it is transformed and it begins to have much higher volume of agro-processing, growth rates can easily rise from the current two per cent to four per cent," he said adding that similarly there is a lot of potential in other sectors such as manufacturing and services.

"There is a lot of potential, there were constrains which are now being removed," he said, citing the example of Labour Codes introduced in Parliament that will simplify the whole labour compliance situation.

He said at the NITI Aayog, the most important focus is on improving private investment by improving the investment climate, accelerating growth, generating jobs, creating policies for that and at the same time ensuring through social programmes that benefits reach the bottom of the pyramid and to the last person standing in the queue.

"The reforms have been done, the network for taking the benefits of growth to the bottom of the pyramid, to the last of the queue has also been laid. The delivery mechanism has been hugely improved," he said.

"When growth accelerates, you will see the benefits at the bottom of the pyramid."

Kumar pointed out that efforts are also being made to promote private investment in the mine, mineral and coal sectors because otherwise, the country's import dependence is increasing both for oil and gas as well as for coal even though there are huge reserves in the country.

He noted that the SDG principle of "Leaving No One Behind" finds resonance with the Government of India's motto of "Sabka Saath Sabka Vikas [Collective Efforts Inclusive Growth]", which guides all development initiatives.

"It is a proud moment to say that India has not only mainstreamed the SDGs (Sustainable Development Goals) and Agenda 2030 but is on the way to achieving some of the targets ahead of time," he said.

Kumar acknowledged that while a lot has been achieved through programmes such as Swachh Bharat Mission and Ayushman Bharat, challenges remain in a country of 1.3 billion people - from a water crisis, shortage of energy in parts of the country, pollution and need to increase female participant rates.

"In the last five years, we have laid the foundation for the benefits of growth to reach the bottom of the pyramid. In the next five years, we are focussed on accelerating growth."