Property rates to go up in Telangana in few months: Realtors

In the next few months prices to go up by around Rs 400 to Rs 450 per sq ft because of demonetisation, RERA and GST. 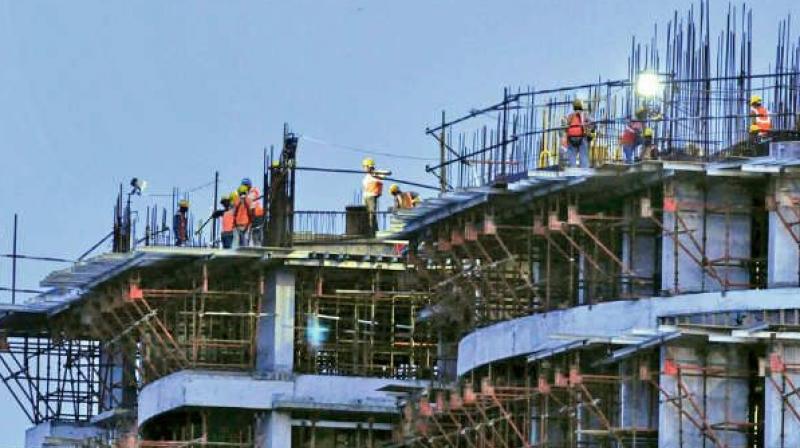 TREDA members are in the process of constructing a total of 8,691 units under the 2-bedroom housing project of the state government.

Hyderabad: A body of realty developers in Telangana on Monday said there will be an increase in prices of both commercial and residential properties in the next few months on account of note ban, RERA and GST implementation.

"In the next few months, we expect impact (prices to go up) by around Rs 400 to Rs 450 per sq ft because of demonetisation, RERA and GST," Sunil Chandra Reddy, Secretary General, Telangana Real Estate Developers Association (TREDA), told reporters here.

He was replying to a query on the impact of note ban, Real Estate (Regulation & Development) Act (RERA) and the GST switchover on the real estate sector on the end consumer. According to Reddy, the Hyderabad real estate market is quite stable.

He said, "It is one of the most affordable markets in the country in terms of cost of real estate. With so many infrastructure projects planned, Hyderabad is a very steady market...a market that will grow in the next two-three years."

"We think the prices will definitely go up and obviously because of huge commercial absorption...the residential rates are also bound to go up. "Because of the demand and also because of the higher cost impact of the new legislations (brought) by the government, we estimate an increase in prices of both commercial and residential projects," he said.

TREDA executive vice president R Chalapathi Rao said in the long-term these measures will prove beneficial for the key sector.

"We have to welcome these changes. Over a period of time business will run on the basis of transparency and confidence. Initially there will be teething  problems...the government has good intention and TREDA is welcoming and supporting all these measures."

Earlier, association president P Ravinder Rao announced that the 8th edition of `TREDA Property Show' would commence here on October 27. As many as 166 stalls of real estate developers, builders, banks and financial institutions will be set up during the three-day event.

Rao said TREDA members are in the process of constructing a total of 8,691 units under the 2-bedroom housing project of the state government.