Consumer durables report steady growth in 2019; slowdown a threat in 2020

The consumer durables sector, estimated to be around Rs 76,400 crore in FY'19, logged a growth rate of about 10 per cent. 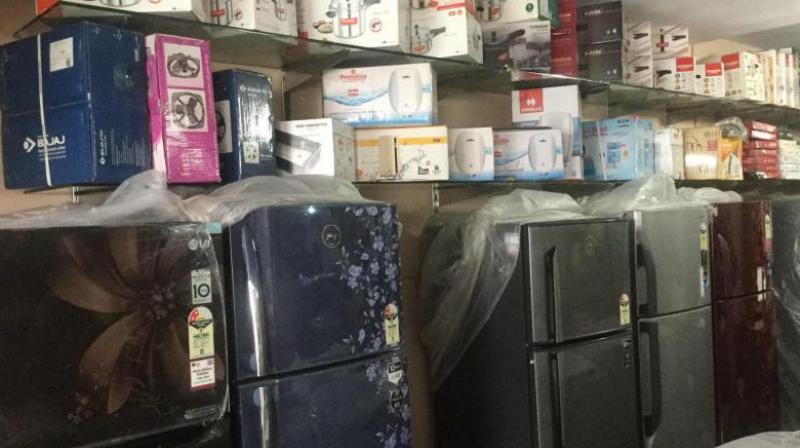 Given current sentiments, 2020 may not register high growth but weather is expected to play a key level for growth. A hot elongated summer may drive growth for cooling products in the first half, said CEAMA President Kamal Nandi.

New Delhi: The consumer durables industry returned to a steady growth path in 2019 after almost two flat years but might not be able to repeat the feat in the coming year as broader market indicates economic slowdown.

The consumer durables sector, estimated to be around Rs 76,400 crore in FY'19, logged a growth rate of about 10 per cent, largely helped by long and harsh summer, which lifted sales of compressor-based cooling products such as AC and refrigerators.

The industry, however, continued to face challenges in segments like TV panels and microwave, which failed to deliver a notable performance during 2019.

The Consumer Electronics and Appliances Manufacturers Association (CEAMA), however, is hopeful that the demand of cooling products next year will be high as well.

"Given current sentiments, 2020 may not register high growth but weather is expected to play a key level for growth. A hot elongated summer may drive growth for cooling products in the first half," CEAMA President Kamal Nandi told PTI.

The consumer durables industry, which received several incentives in 2019 from the government in form of reduction in customs duty on import of TV panels (open cells), among others, expects the ratio of localisation and backward integration to increase and contribute more towards Make-in-India.

"In the past 5 years, overall approximately Rs 7,500 crore investment has been made by manufacturers - mainly for capacity expansion and new capacity development. This trend will continue in future as well," said Nandi, who is also Godrej Appliances Business Head and Executive Vice President.

"The need of the hour is backward integration and starting component production in India. Those steps are happening now," he said adding that "we are working very closely with our suppliers and encouraging them to start local manufacturing in India. Definitely next year localisation of components would definitely improve".

Presently, the appliances and consumer electronics have on an average 50 to 55 per localisation. The import ratio depends on the kind of products such as it is higher in case of products such as TV panels and high-end ACs, where open cells and compressors are imported respectively.

The company has already achieved almost complete localisation in products like ACs, microwave, front-load washing machines, barring some others.

"Now LG is going to increase locaslisation efforts in india," said Babu adding that "the company is focusing for 100 per centlocalisation".

Besides, the industry is also gearing up to accommodate consumer demands for more value-added features and augmented sizes in 2020 across product categories like inverter models in ACs, bigger screen sizes in TV panels, large capacity in refrigerators and washing machines along with Internet of Things (IoT) features in selected models, which not only provide a better value but also a higher margins.

Commenting on the performance of the industry, Nandi said: "2019 started off well with cooling products showing traction in the first half  however, the demand started tapering in the second half. The ACE (Appliances and Consumer Electronics) industry as a whole expects to end with around 9-10 per cent growth at the end of the year. Floods in various parts and low economic sentiments overall have affected 2019."

Haier India President Eric Braganza said though the industry had a good run in the first half but failed to maintain the momentum in the second half.

"What has happened that money circulation has come down. In the second half of this year, there has been a liquidity crunch and that is why because of a good H1 run, we ended the year reasonably well," Braganza said.

In the first half of the year, ACs reported an over 30 per cent growth and refrigerator 15 per cent, according to CEAMA.

Voltas Managing Director and CEO Pradeep Bakshi said: "This year, Voltas recorded a 42 per cent growth in H1 FY20 by continuing to focus on increasing the reach in rural markets."

Similarly, BSH Home Appliances, which operates in refrigerator, washing machine and Kitchen appliances, recorded a good growth and expects to continue the momentum by expanding its business.

"FY 2019-20 has been a year full of fervour for us at BSH. In the last few years, we have experienced colossal success in India and today we are experiencing about 35 to 40 per cent Y-O-Y growth in the country," said BSH Home Appliances CEO and MD Neeraj Bhal.

According to Sharma, products such as ACs, washing machines and refrigerators have done well during the year, while TV panel failed to pick up momentum.

"It was a reasonably challenging year and especially categories which are in commodatised zones as TV panels witnessed a shift in terms of customer preference and also momentum. We have noticed that a lot of entertainment appetite of customers are fulfilled by smaller screens as mobile phones and tablets. Because of this, there is impact on growth of TV," said Sharma.

"The year was mixed for the consumer durables industry. Electronic category which is TV did not witnessed any growth and the white goods have a good year with a growth in double digits," he said adding "After having two years of almost flat or slow growth, the industry had a growth."

According to a recent joint report by CEAMA and research & consulting firm Frost & Sullivan, the appliances and consumer Electronics (ACE) industry size is expected to be double and have a total market size of Rs 1.48 lakh crore by FY 25.

The market is expected to see acceleration in growth ignited by surging rural consumption, reducing replacement cycles, increasing penetration of retail, a wide choice of brands and products at various price points, it added.