PNB, OBC, Andhra Bank next in line for merger 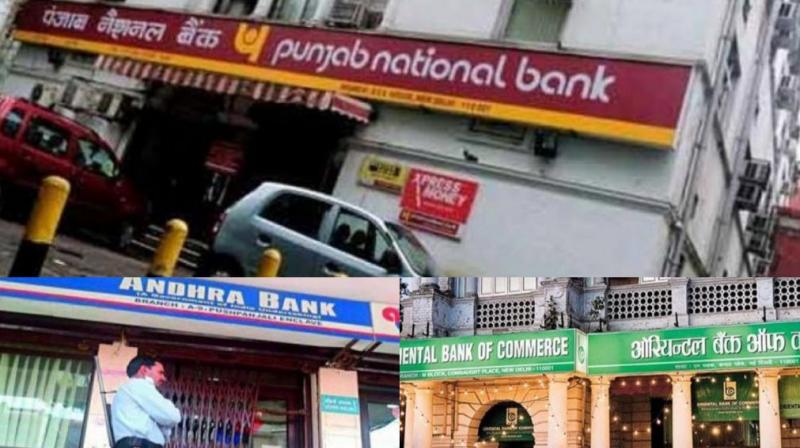 The government, which reportedly asked the RBI last month to make a list of candidates for mergers and set a time-frame for bank consolidation, is going full steam ahead on its plan to clean up the banking system and create fewer, better-capitalised lenders.

New Delhi: The government, which reportedly asked the RBI last month to make a list of candidates for mergers and set a time-frame for bank consolidation, is going full steam ahead on its plan to clean up the banking system and create fewer, better-capitalised lenders.

After announcing the merger of Bank of Baroda (BoB), Vijaya Bank and Dena Bank last week, the government is likely to announce a similar merger before December this year.

Sources said Punjab National Bank (PNB), Oriental Bank of Commerce (OBC) and Andhra Bank could be next in line for consolidation. They said the government is currently holding discussions with bank officials and analysing the feasibility of their amalgamation. An announcement in this regard is expected in this calendar year itself, the sources said.

Last Monday, the government announced the proposal to merge BoB, Dena Bank and Vijaya Bank and the cabinet is likely to approve this scheme of amalgamation soon.

The three state-run banks would work on a strict timeline and necessary regulatory process would be over by the fiscal year end so that the merged entity could begin operations from April 1, 2019.

This is the second bank consolidation move by the Narendra Modi government after State Bank of India merging five of its subsidiary banks with itself last year and taking over the Bharatiya Mahila Bank.

The government has been battling for years to clean up its banks, which have the highest bad-loan ratio after Italy among the world’s 10 largest economies. Public sector banks are estimated to hold 90 per cent of non-performing loans, and 11 of the 21 state-run lenders are operating under the Reserve Bank of India’s prompt corrective action (PCA) plan, which restricts new lending.

In late July, minister of state for finance Shiv Pratap Shukla told the Rajya Sabha that the government has asked the RBI to examine the possibility of merger among public sector banks to achieve synergy and scale of operation.

In a written reply, the minister then said no timeline had been fixed for the merger of public sector banks.

"Since various approaches involving varying processes are possible with regard to synergy/consolidation amongst PSBs, government has requested the Reserve Bank of India for views as well as suggestions regarding specific possible combinations to achieve scale and synergy for appropriate consideration," he then said.

With a view to facilitate consolidation among public sector banks to create strong and competitive entities, serving as catalysts for growth, with improved risk profile of the bank, the government has put in place an Alternative Mechanism (AM) comprising three ministers, he had said.

Giving details of the mandate for AM, he said, the proposals received from banks for in-principle approval to formulate schemes of amalgamation shall be placed before the institution although there is no proposal for consideration before it.

AM may also direct banks to examine proposals for amalgamation, he said, adding that it will receive inputs from the RBI before according in-principle approval.