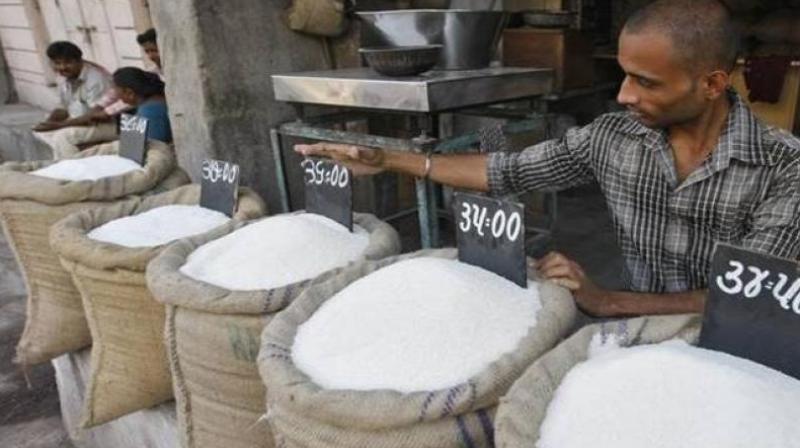 The government is expecting about 24 per cent increase in the country's total sugar output to around 25 million tonnes.

New Delhi: The government is expecting about 24 per cent increase in the country's total sugar output to around 25 million tonnes in the marketing year beginning next month on likely higher output in Uttar Pradesh and Maharashtra following good rains, an official source said.

This is an initial projection based on the inputs of the state governments. The estimate, however, is in line with the industry body ISMA's projection.

The country's sugar output in the ongoing 2016-17 marketing year (October-September) is estimated to be lower at 20.2 million tonnes because of poor rains. India is the world's second biggest sugar producer.

In a meeting with state cane commissioners called by the Union Food Ministry, official sources said state governments have submitted the sugar production figures after assessing the likely sugarcane output and recovery level.

Based on their inputs, the country's overall sugar output is expected to be around 25 million tonnes in 2017-18 marketing year, the sources said.

The Uttar Pradesh government has submitted sugar output to be 10.2 million tonnes in the 2017-18 marketing year, higher than 8.77 million tonnes to be achieved this year.

Since there was cane sowing area difference in the state data, the UP government has been asked to re-check the acreage and submit the final estimates in a day or two, the sources said.

Sugar mills normally start crushing operations after Diwali, but the central government has asked them to advance. There are around 500 mills in the country.

As per the first advance estimate of the agriculture ministry, sugarcane output might increase to 337.69 million tonnes this year from 306.72 million tonnes last year on account of good rains.

Sugarcane cultivation in both Maharashtra and Karnataka is largely rainfed unlike Uttar Pradesh where it is irrigated.