If the moratorium is extended by another three months, then it is going to hurt us and smaller NBFCs particularly, said Parekh 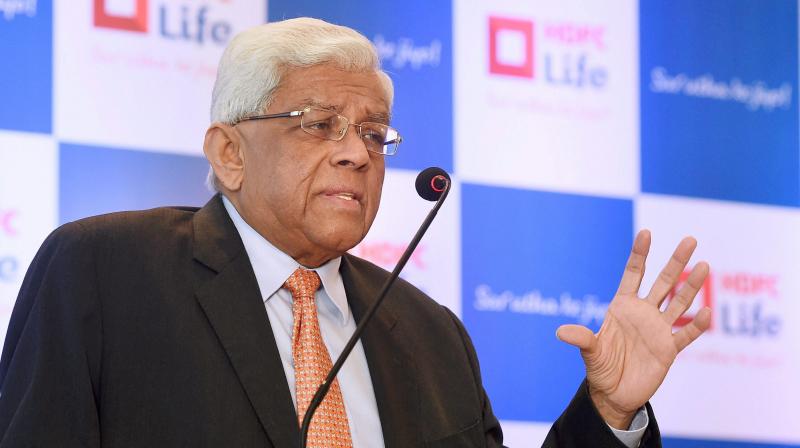 New Delhi: Noted banker and HDFC Ltd Chairman Deepak Parekh on Monday urged RBI Governor Shaktikanta Das not to extend moratorium on repayment of loans as many entities who are capable to repay are taking undue advantage of the scheme and this is hurting the financial sector, especially NBFCs.

The six-month moratorium on repayment of loan extended by banks and financial institutions on the direction of the Reserve Bank of India (RBI) will come to an end on August 31.

There are growing demands for extending the facility by another three months, as income disruption due to the COVID-19 pandemic still continues since business is not as usual due to renewed lockdown in various parts of the country.

In an interactive session with the RBI governor organised by CII, Parekh requested Das, "Please do not extend the moratorium because we see that even people who have ability to pay, whether individuals or corporates, are taking advantage under this moratorium and deferring payment."

He added that "there are some talks that there will be another extension of three months, it's going to hurt us, and hurt the smaller NBFCs (non-banking financial companies) particularly".

Responding to the request, the RBI governor said he would not be able to make any comment on this but has noted the suggestion.

In March, the RBI allowed a three-month moratorium on payment of all term loans due between March 1 and May 31. On May 22, the central bank extended it till August 31, providing relief to borrowers amid the complete lockdown.

Parekh also suggested that the central bank should purchase the bonds of financial institutions directly as it is happening in some other countries.

"Globally, central banks are buying bonds of private sector, junk bonds, commercial paper, while you have taken a stand that we should fund the banks and the banks will buy all of these instruments involving microfinance or housing finance companies," he said.

Responding to the suggestion, Das said the law does not permit so in India.

The government has come up with some schemes, including for purchase of bonds issued by stressed NBFCs and housing finance companies, and guarantee of up to 20 per cent of first loss.

He said there are renewed activities in even below AAA-rated bonds and the position has improved due to various liquidity infusion measures taken by the central bank since February.

"I can assure you that the RBI remains vigilant, we are monitoring the situation, and as and when certain steps are required, we will not hesitate to take those steps.

"You are aware about the way the RBI intervened, to support the mutual fund industry and the RBI will always be proactive...as and when whatever steps are required we are prepared to consider," Das said.

Terming it the most critical step, Parekh also made a strong pitch for a one-time restructuring to avoid a surge in non-performing assets (NPAs).

NPAs are expected to soar up to about 12-15 per cent next year in March, Parekh said adding that "if banks, NBFCs and HFCs are permitted restructuring, we can save ourselves from the future problem".

In 2008 also, when the world was hit by a global financial crisis after Lehman Brothers went insolvent, the RBI had announced a one-time loan restructuring for several sectors to help them tide over the economic woes.

The Indian Banks' Association (IBA) and many other bodies have made representation to both the government and the RBI for a one-time restructuring in the wake of massive disruptions caused by the pandemic.

In June, Finance Minister Nirmala Sitharaman said the government is in talks with the RBI for the one-time restructuring of loans to help stressed companies.