Naveen Kumar, the complainant, has named the Flipkart founders along with other officials for cheating him of Rs 9.96 crore. 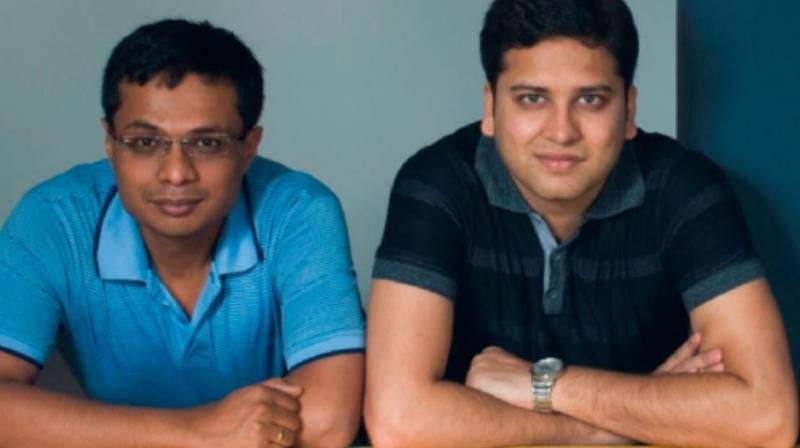 Founders of Flipkart Sachin Bansal and Binny Bansal, along with three top officials have been booked for allegedly cheating a Bangalore-based businessman of Rs 9.96 crore. (Photo: Flipkart)

Bengaluru: Founders of e-commerce biggie Sachin Bansal and Binny Bansal, along with three other top executives of the company have landed themselves in trouble for allegedly “cheating” a businessman of Rs 9.96 crore.

The founders of million dollar homegrown e-commerce major, along with sales director Hari, accounts managers Sumit Anand and Shararaque have been booked in the case. The complainant, Naveen Kumar, owner of Indiranagar-based C-Store Company has alleged that the above named cheated him by not clearing his dues worth Rs 9.96 crore towards 12,500 laptops that he had supplied, reported TOI.

According to Naveen, he had entered intro a contract with Flipkart to supply laptops and other electronic goods. Accordingly, he had supplied 14,000 laptops to the company between June 2015 and June 2016 for its Big Billion Day sale.

Naveen alleged that Flipkart returned 1,482 units but did not pay for the remaining units. “TDS and shipping charges for those units too were not paid. When asked to clear the dues, Flipkart falsely claimed it had returned 3,901 units. By not clearing the dues, they have cheated me to the tune of Rs 9,96,21,419," read Naveen’s FIR.

A case has been registered under IPC sections 34 (common intent), 406 (criminal breach of trust) and 420 (cheating), and a probe has been initiated by the Indiranagar police.