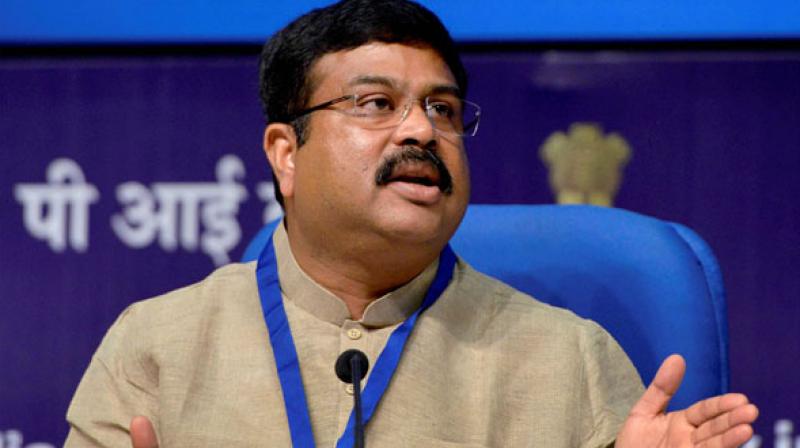 Oil Minister Dharmendra Pradhan on Tuesday made a strong case for inclusion of natural gas in the Goods and Services Tax. (Photo: PTI)

New Delhi: Oil Minister Dharmendra Pradhan on Tuesday made a strong case for inclusion of natural gas in the Goods and Services Tax, saying that if polluting coal can be included, then the environment-friendly fuel certainly deserves a place in the new regime.

"Coal has been included and levied with 5 per cent tax but gas is outside GST, how fair is that," he said at the KMPG Energy Summit here.

Crude oil, petrol, diesel, aviation turbine fuel (ATF) or jet fuel and natural gas are not included in GST, which has amalgamated over a dozen indirect taxes including excise duty, service tax and VAT since it kicked in from July 1.

Hence, while various goods and services procured by the oil and gas industry are subjected to GST, the sale and supply of oil, gas and petroleum products continue to attract earlier taxes like excise duty and VAT.

Unlike other industries which can take credit for any tax paid towards the furtherance of business, no credits on input GST will be available to the oil and gas industry leading to the huge additional indirect tax burden.

Pradhan's ministry had previously written to the Finance Ministry to consider including natural gas in GST.

Industry body Ficci has also pitched for the inclusion of natural gas in the new indirect tax regime so as to help producers contain cost and aid in moving towards a gas-based economy.

In a letter to Finance Minister Arun Jaitley, Ficci said that keeping natural gas out of the GST is causing hardships and having an adverse impact on the producers as it is increasing their costs.