Onion prices hit all-time high, being sold at Rs 80 per kg in Delhi

Onions in other metro cities are being sold at Rs 50-70 per kg depending on the quality and locality, data showed. 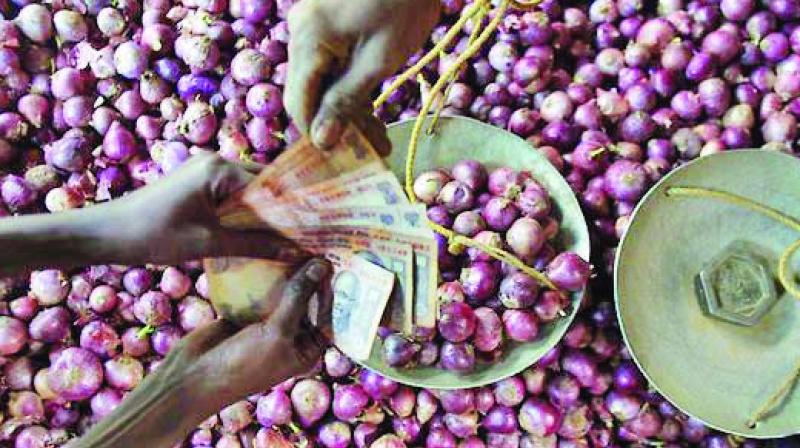 New Delhi: Retail onion prices have touched Rs 80 per kg in the national capital owing to tight supply, while a similar spike is seen in other cities as well, as per the trade data.

Onions in other metro cities are being sold at Rs 50-70 per kg depending on the quality and locality, the data showed.

At Azadpur mandi here, Asia's largest vegetable market, onion prices are ruling at over Rs 50-60 per kg, and the same onion is being retailed at Rs 80 per kg today, a trader said.

Wholesale and retail prices are ruling high because of lower arrivals from the key growing states such as Maharashtra, Karnataka and Madhya Pradesh.

In Maharashtra's Lasalgoan mandi -- Asia's biggest market for onion -- arrivals have dropped by 47 per cent to 12,000 quintal on Tuesday from 22,933 quintal on the same day a year-ago.

Onion at Lasalgoan is being sold at Rs 33 per kg on Tuesday as against Rs 7.50 per kg a year-ago, as per the data maintained by the Nasik-based National Horticultural Research and Development Foundation (NHRDF).

Meanwhile, the Centre has asked state-owned MMTC to import 2,000 tonnes of onion and directed Nafed and SFAC to source 12,000 tonnes locally to boost supplies.

A minimum export price of USD 850 per tonne has been imposed to restrict outbound shipment of onion.