5 points Yashwant Sinha made in his piece on economy

Sinha was Finance Minister in 1991 when India had faced balance of payments crisis. 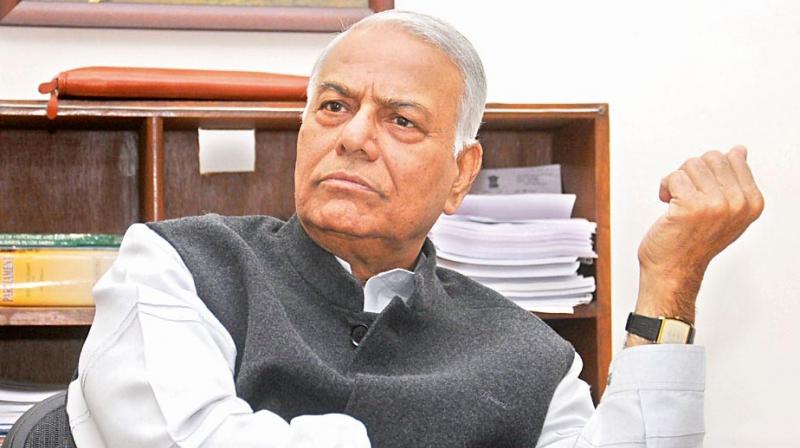 Mumbai: Former Finance Minister Yashwant Sinha, who oversaw India's 1991's balance of payments crisis as chancellor of exchequer, has spoken his heart out in a column 'I need to speak up now' he wrote for The Indian Express. Sinha in the article says he does not intend to advance his personal interests by writing the opinion piece.  Instead, he says, he is doing his national duty by pointing out certain loopholes in the present state of affairs in the Indian economy.

In January 1991 amid balance of payments crisis, India was left with only $1.2 billion worth of foreign exchange reserves that hit the Indian economy hard. By June that year, the reserves had gone down by 50 per cent to some $600 million, that was enough for only three weeks of imports. India was at the edge and was close to defaulting on its external debt obligations.

Sinha, in his article, has slammed the way the finance ministry headed by Arun Jaitley has responded to the 'grim' situation that has emerged after the economy has slipped to a new low every quarter after quarter, since last year. He claims whatever he is speaking is the word of other BJP functionaries who have not spoken out as yet and have chosen to keep mum out of fear. Here are a few takeaways from Sinha's personal views:

1) Finance Minister Arun Jaitley has failed to arrive at a formula to resolve legacy problems. According to Sinha, stalled infrastructure projects and huge non-performing assets, NPAs, of banks were the main legacy issues. He says Arun Jaitley was a luckier finance minister as he had an oil bonanza at his disposal. He had lakhs of crores of ruppees still he failed to tame these legacy issues. "Depressed global crude oil prices placed at his disposal lakhs of crores of rupees," Sinha writes.

2) Private investment is at two-year low, industrial production has also fallen down and agriculture is in distress, all in never seen before conditions. The construction sector, one of the major job creators, is also suffering thus risking hundreds of thousands of jobs.

3) He writes: "Demonetisation has proved to be an unmitigated economic disaster, a badly conceived and poorly implemented GST has played havoc with businesses and sunk many of them and countless millions have lost their jobs with hardly any new opportunities coming the way of the new entrants to the labour market."

4) According to Sinha, the methodology for calculating the Gross Domestic Product, GDP, was changed in 2015 by the new dispensation. The GDP growth in the first quarter, April-June, of 2017 fiscal year came in at 5.7 per cent, a much lower figure than what the most of the experts had expected. After the way to calculate GDP was changed, the growth rate record before it rose statistically by 200 basis points. So, Sinha writes, the GDP growth for June comes down to 3.7 per cent according to old methods.

5) Even the SBI, the largest public sector bank of the country, has stated with unusual frankness that the slowdown is not transient or “technical”, it is here to stay and the slowdown in demand has only aggravated the situation, he writes.