Besides tax break, there could even be a universal basic income in the Budget, industry officials and tax experts said. 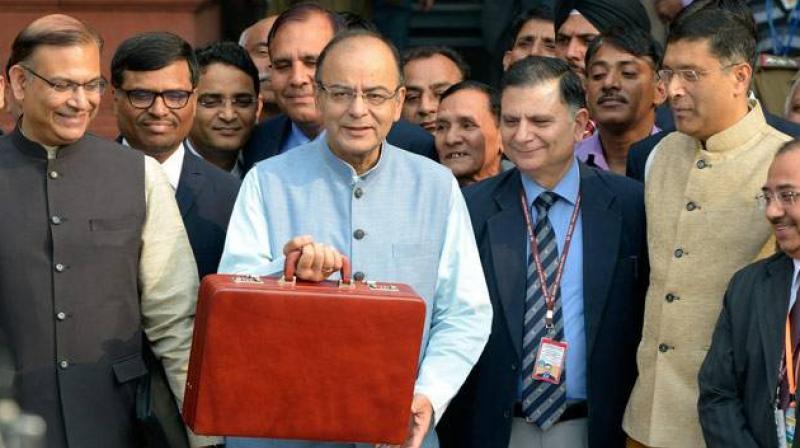 New Delhi: Finance Minister Arun Jaitley will on Wednesday present his fourth and perhaps the most challenging Budget that may look to soften blow of currency ban with tax and other sops as he seeks to revive growth.

While largely sticking to fiscal consolidation roadmap, Jaitley will present the Budget for 2017-18 amid strong headwinds caused by government decision to invalidate 86 per cent of the currency and the newly elected US President making protectionist noises.

Topping the list of sweeteners could be the hike in Income Tax exemption limit to Rs 3 lakh from current Rs 2.5 lakh as the Minister will look at putting more money in hands of people to not just create a feel good atmosphere but also check the disruptive impact of demonetisation on demand, supply chains and cratered credit growth.

Alternatively, he may raise the deduction limit for interest paid on home loans to Rs 2.5 lakh from Rs 2 lakh currently. A higher medical rebate may also be on the cards. Besides tax break, there could even be a universal basic income in the Budget, industry officials and tax experts said.

But cutting 30 per cent corporate tax rate to lift sagging investments may not be easy given that government's official estimate of 7.1 per cent GDP growth for the current financial year does not take into account the chaos wrought by demonetisation. While revenue collection targets for the current fiscal may exceed, there are doubts if Jaitley may project any substantial jump in tax receipts in 2017-18.

Also, the rising oil prices are a cause of worry for him, leaving him with very little fiscal room to manoeuvre social and infrastructure schemes. Incentives or schemes for farmers and rural India, women and social sectors like health and education may be cornerstone of his budget given that five important states including Punjab and Uttar Pradesh will be voting within days of his Budget presentation.

Besides agriculture, the Finance Minister may also announce schemes for boosting domestic manufacturing and promoting start ups. Tax experts and economists said Jaitley may hike the service tax (currently at 15 per cent) to align with the GST regime.

It will be keenly watched if he makes any changes to the tax regime on investments in equities. At present, gains from transactions in shares held for less than 12 months are considered short-term capital gains and are subject to 15 per cent tax.

There is a thought that the 1-year limit for long term could be changed to two years but the tax rate is likely to be kept at zero. He will have to juggle numbers to remain largely within the fiscal consolidation roadmap.

The current year's fiscal deficit target of 3.5 per cent of GDP is mostly likely to be met on back of surge in tax receipts from 7th Pay Commission grant to employees and tax amnesty schemes.

It remains to be seen if he will narrow the deficit, the widest in Asia, in 2017-18 to 3 per cent planned previously. He may continue to piggyback on public spending, especially on infrastructure, as he looks to reverse the investment collapse.

A roadmap on Goods and Services Tax (GST), that will not just turn India into one market with one tax rate but also improve tax compliance and check evasion, may figure in Jaitley's Budget speech.