Minister informed members that two-third of railways revenue is through freight and 50 per cent of that is from Coal. 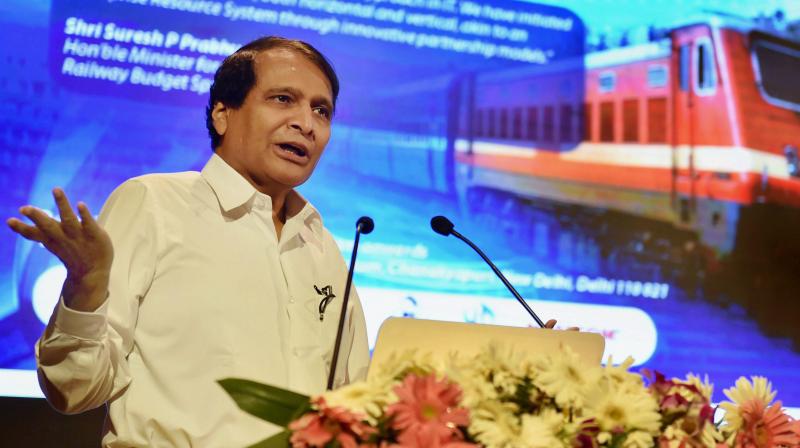 He told the Rajya Sabha that efforts were on to complete the dedicated freight corridor by 2019 as it has fast-tracked work on it by awarding contracts worth Rs 24,000 crore.

Talking about diversifying the railways freight basket, Prabhu said its initiation has already been done by carrying out long-term contracts.

"We hope to diversify the freight basket and its initiation has been done by carrying out long-term contracts. "We have decided to frame a long-term freight policy with lock-in contracts and new time-table freight train have also been started," he told members in Rajya Sabha.

Noting that a lot of work was required to be taken up on the freight corridor, he said the land acquisition issue was also being resolved.

"The dedicated freight corridor is a big game changer and after our government came to power, we have fast-tracked and awarded new contracts of 24,000 crore it is our effort to complete it by 2019," he said.

"We are encouraging the private freight terminals which sets up a warehouse and would combine small cargo and come to railways as big cargo, which will benefit us," he said.

The Minister informed members that two-third of railways revenue is through freight and 50 per cent of that is from Coal. The entire Railways is run from freight coming from ten major commodities, he said.

In this regard, he talked about the "Beyond Coal Mission" launched by railways to think beyond coal and concentrate on other cargo for increased freight revenue.

"We have launched the 'Beyond Coal Mission' and work has been started on it," he said.

The Minister informed members that Railways this time has received 50 MT less coal for transportation this year, of which 20 MT is imported and 30 MT is local.

"I am happy to state that with the steps and changes brought in freight policy has resulted in the last three months alone making a new record of 1106 MT of cargo, against 1104.2 MT and exceeding it," he said.

"The situation six-eight months ago was bad as many big countries handling freight have seen a big fall, but we have improved," he said.

The Minister said time is coming when we are moving towards carbon-less emission and Coal being one of the principal cause of green house emissions, efforts are on to reduce its intake and move to safer fuels.

In his written reply, the Minister said "Indian Railways has achieved freight handling of 92.07 million tonnes during the month of February 2017, which is an increase of 3.46 per cent over last year and is the highest ever monthly loading for February."