A Reuters survey of economists forecast growth slipped to 6.3 pc annually in the quarter ending in March. 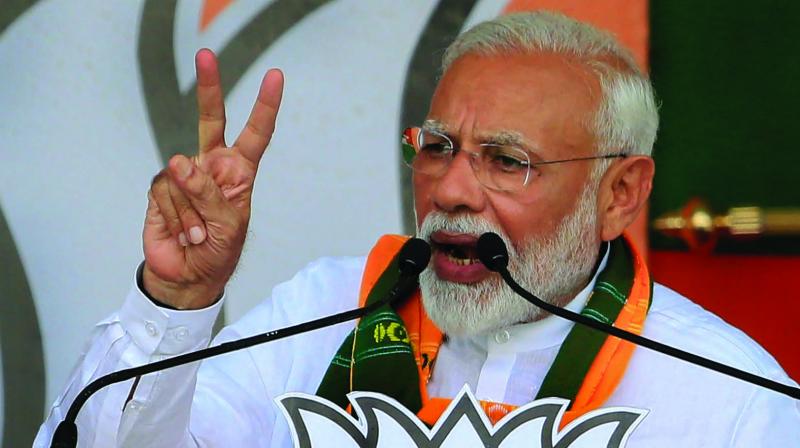 New Delhi: India probably lost its spot as the fastest growing major economy to China in the January-March quarter as a chill in domestic and global consumer demand hit manufacturers and service providers.

But it puts an onus on him to deliver reforms that can truly unlock growth, which had waxed and waned during his first five years in office.

A Reuters survey of economists forecast growth slipped to 6.3 pc annually in the three months ending in March, its slowest pace in six quarters.

If they are right, India would lag China, which notched 6.4 per cent growth in the March quarter, for the first time in one-and-a-half years.

Modi will be sworn in later on Thursday, and is expected to begin his second term by prioritising growth in an economy that isn’t creating enough new jobs for the millions of young Indians entering the labour market each month.

His first task could be finding a new finance minister, as Arun Jaitley has asked to step aside due to health reasons. Whoever takes Jaitley’s place will have to draw up a budget due to be presented in July.

The government is widely expected to deliver some fiscal stimulus while keeping the deficit at manageable levels. On the plus side, the Reserve Bank of India could have leeway to reduce interest rates as inflation remains subdued.

The gross domestic product data for January-March quarter and provisional estimates for the whole 2018/19 fiscal year ending in March will be released on Friday around 1200 GMT.

The RBI has lowered its economic growth forecast for 2019/20 fiscal year beginning April to 7.2%.

The central bank’s monetary policy committee (MPC), which has cut policy rates by 50 basis points this year, is expected to cut the repo rate by a further 25 basis points at its June 4-6 meeting, bringing it to 5.75%, the lowest since July 2010.

Retail inflation has stayed below 3 percent for last six months, possibly low enough to take the risk of cutting rates without waiting to seeing whether the monsoon rainy season starting next month holds any danger of a spike in food prices.

Corporate earnings hit a six-quarter low growth of 10.7 per cent during January-March quarter on weakening consumer sentiment and softening commodity prices, ICRA, the Indian arm of the ratings agency Moody’s said on Tuesday, citing a sample of over 300 companies.

“The signs of slowdown in domestic demand are visible both in urban and rural areas,” Federation of Indian Chambers of Commerce and Industry said in a statement earlier this week, while submitting pre-budget demands to the finance ministry.

Industry chambers have lobbied for a fiscal stimulus including a cut in corporate tax rates and lower interest rates.

The government could front-load its budget spending and announce some tax sops for individual tax payers and companies, a senior finance ministry official told Reuters, while citing fiscal constraints due to a slower growth in tax receipts.

But some economists said monetary and fiscal stimulus could have a limited impact.

They fear the economy is in danger of a prolonged phase of slower growth due to stagnant rural wages, rising real interest costs for manufacturers and reluctance to lend among banks and non-bank finance firms due to alarmingly high defaults.

“While cyclical challenges can be addressed through short-term measures, the need of the hour is to address the structural challenges plaguing the Indian economy,” said Sunil Kumar Sinha, economist at India Ratings and Research, the arm of Fitch ratings agency.

Some finance ministry officials have suggested Modi’s government could push long pending reforms, related to land acquisition and labour, during the coming year, though it will have to coordinate with state governments.