Business   In Other News  01 Sep 2020  Komal Baldwa's start-up fights the intimate enemy
Business, In Other News 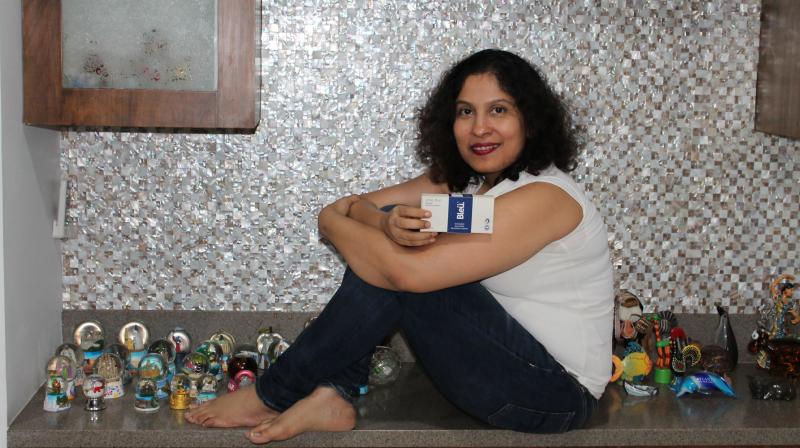 Bleü is built largely from her own savings and “bootstrapped,” as she likes to call it, it is still is all about helping women avoid all kinds of chemicals entering their bodies

When you meet Komal Baldwa, she strikes you as too unassuming and unlikely a candidate for a woman on a mission and an unconventional and difficult mission at that but that is exactly what she is.

Her start-up Bleü promotes non-toxic condoms and she hopes to diversify into many other products. “I am menstruating right now and if I was in the UK or Europe, I could buy a natural roll-on balm off the counter to help with the pain but here I, and women in general, have nothing.”

She has begun, however, with condoms. Male condoms are full of harmful chemicals. Benzocaine, for example, is a standard chemical in ‘long lasting’ condoms. It causes burning and itching for the woman (or man) in whom it is inserted. It numbs the body part with which gets in to contact , as Benzocaine is a better name for local anaesthesia chemicals. Or nitrosamines, a byproduct of regularly processed latex, which is cancerous.”

No one ever tells you these things is Komal’s point and she came to them through her own painful experiences which she now realises were caused by condom use.

“Most condom companies only advertise the product as causing long-lasting pleasure for the man, she says with a remarkable lack of rancour. “but in numbing the privates and helping men last forever “they forget about women and what these condoms are doing to their bodies.”

Colours and flavours are the other selling point for condoms. Once again, parabens, a chemical, is involved and it mimics estrogen once absorbed in the body and causes hormonal imbalances and reactions in the body.” Not only is this harmful to women, it is also harmful to the men using them (not to mention gay men and hijras, though women are Komal’s primary concern.

If her journey to this point, which has ranged from terrible pain and discomfort in the early years of her marriage using condoms, through judgemental and sexist gynaecologists telling her she was a bad woman to be using condoms after marriage and not wanting children (and asking her mother what sort of daughter she had produced!) to having sicko Indian men (pardon the tautology) send her sleazy messages, has taught her one thing, it is that women are at the receiving end from all angles and it is time they took it in their own hands (in a manner of speaking) to change things.

Bleü is built largely from her own savings and “bootstrapped,” as she likes to call it, it is still is all about helping women avoid all kinds of chemicals entering their bodies whether through an anti-pregnancy pill or a chemical condom.

While she first found these condoms abroad and got them imported for herself, today, two years of research later and working with condomologists, she reverse-engineered it and now produces the super-sleek, chemical free condoms here for a pittance compared to what one pays online to import them.

“I am still working on the technology to get the best possible product and build a range of other products, from non-chemical lubricants (even the water-based ones are harmful) to roll-ons for menstrual pain that will make life easier for women.”

Alert to the many problems women face, from the mortification at having to buy a condom given the moral policing (she posts the condoms wrapped in anonymous packaging and the word condom does not show on the bill either) to being clueless about the pain and the itching and the discomfort, Komal wants to put an end “to women having to suffer in silence and having no one to talk to.” Amen to that.