Business   In Other News  02 Mar 2019  Dozee got sensor to map your health, sleep cycle
Technology, Gadgets

Dozee got sensor to map your health, sleep cycle

Proliferation of smart watches has led to a behavioural change as people grew conscious about their health. 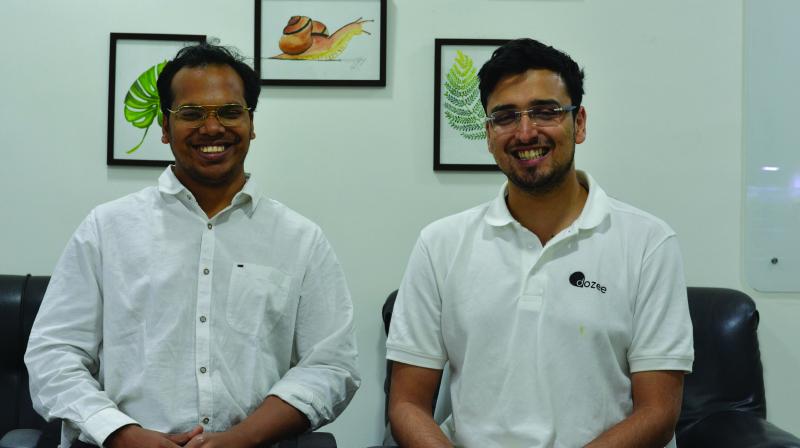 Hyderabad: With the introduction of electrocardiogram (ECG) feature in Apple Watch, the Silicon Valley giant has signalled that their attention is now on healthcare data. And if reports are to believed, then the next version of the Watch may even have features that track the users' sleep cycle.

While it was only a matter of time that the makers of wearable devices would like to delve deeper into this treasure trove of data, proliferation of smart watches has led to a behavioural change as people grew conscious about their health.

However, much closer to our homes, a Bengaluru-based firm - one of the top 5 start-ups in the recently-concluded BioAsia - has developed a much less invasive sensor sheet that can help track not just the sleep cycle, but also the users' heartbeat, respiration, sleep cycle, and stress levels, while they're sleeping.

Founded by two ex-co-workers of Altair Engineering, Mudit Dandwate and Gaurav Parchani, Dozee has managed to find a solution to enable even people who aren't tech savy to track their data. Instead of a wearable device, the company, whose name is a pun on drowsy, uses a thin sensor sheet that needs to be placed below the mattress.

While starting up a new business always involves a lot of risk, Mudit seems to have a calm head. Pointing out the reasons behind his desire to start his own business, Mudit said, "It's the best time to take a risk. With no one depending upon on me, I can spend my youthful energy to take up the challenge."

The 27-year-old, who spent a considerable time of his childhood in Gwalior, met his co-founder while working on simulator for racing cars at Altair Engineering in Bengaluru. While the traffic situation in the city may put off many, Mudit seems to like it in here.

Besides his love for Bengaluru, he also cited the start-up environment in the city as one of his reason behind his choice to set up his office there. But, like every start-up, Dozee too had to face many challenges on its way here. The IIT Bombay alumnus said that keeping yourself and the team motivated is one of the biggest challenges. "While every start-up needs time to grow, Dozee - a healthcare hardware firm -will require an even longer gestation period due to the nature of the sector. During that period, keeping yourself and your team motivated is one of the key learnings that I plan to take home with."

While long gestation period is a big factor, the company, which was founded in October 2015, started to roll out its devices in November 2018. The long wait was definitely challenging, but we got our timely breakthrough that kept us going. "Our first major breakthrough was when we managed to develop our first prototype in February 2016. The second news came along with our second prototype when National Institute of Mental Health and Neurosciences (NIMHANS) gave a thumbs-up to us."

But the long delay in the roll out, in the end proved to be a good thing as it allowed fine tuning its product to such an extent that Mudit claims accuracy of its data can prove to be its differentiator to other rivals in sleep tech sector. The company, which adheres to the data norms of EU and US, hopes to not only become a major player in India but to become a global player in the future.