Business   In Other News  03 Apr 2020  Coronavirus outbreak: US says small business aid will start Friday
Business, In Other News 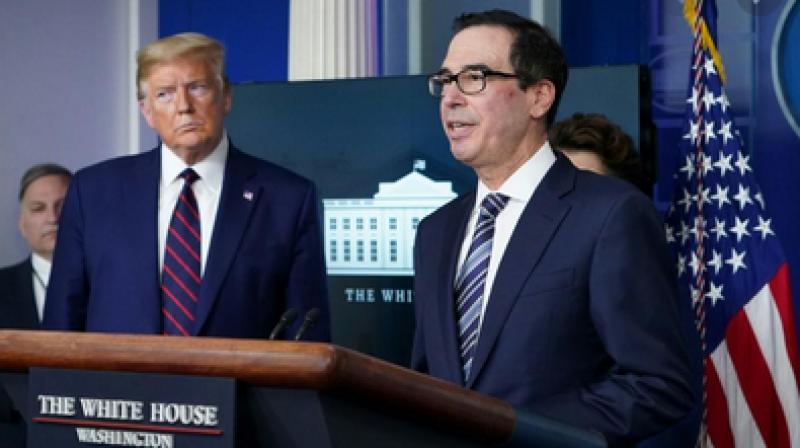 US Treasury Secretary Steven Mnuchin, shown during the White House virus press briefing on April 2, 2020, said the aid will begin but that not everyone would receive a loan immediately (Photo- AFP)

Washington: The US Treasury Secretary promised small and medium-sized businesses Thursday that financial aid from the USD 2.2 trillion stimulus package aimed at cushioning the economic impact of the coronavirus pandemic will flow as early as Friday.

"This will be up and running tomorrow. You'll get the money, you'll get it the same day," promised Steven Mnuchin, speaking at the daily White House press briefing on COVID-19.

However, he warned that while the aid will be "up and running, that doesn't mean everybody will get their loan tomorrow."

Businesses with 500 employees or fewer that is, hundreds of thousands of companies in the world's largest economy should be able to access the USD 350 billion promised within the massive aid package adopted by Congress.

The Trump administration says all that is required to apply for a bank loan is to fill out a simple form.

The Treasury guarantees the loan and will wipe it out if the company keeps its employees or re-hires those it may have already laid off.

But late Thursday, there were increasing reports of bank groups complaining that they did not have enough information to implement the government's aid plan.

The website of the largest bank in the US, JPMorganChase, stated: "Financial institutions like ours are still awaiting guidance from the SBA and the U.S. Treasury. As a result, Chase will most likely not be able to start accepting applications on Friday, April 3rd, as we had hoped." Mnuchin said he had spoken to key US bank executives about the initiative.

Before the coronavirus spread to the United States and shut down large parts of industry, especially in services such as restaurants, the country's economy was robust.

The unemployment rate was only 3.5 percent in February, the lowest in 50 years.

Just two weeks later, nearly 10 million people have made their first claim for unemployment benefits, according to figures released Thursday.