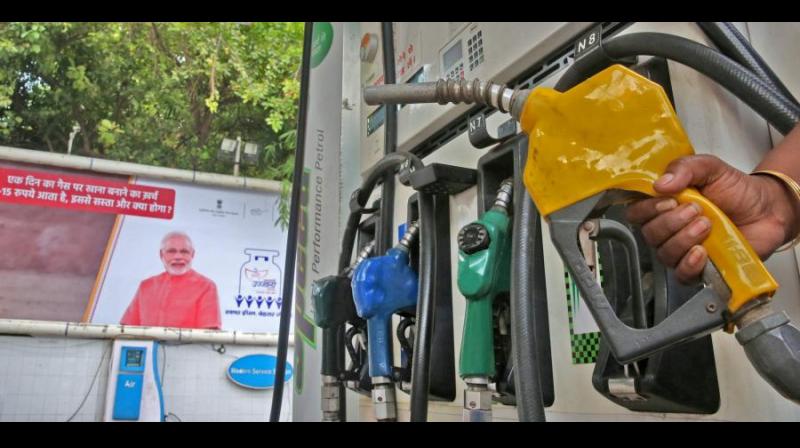 New Delhi: With the thirteenth revision in the fuel prices in fifteen days, petrol and diesel rates have gone up by 80 paise each on Tuesday.

With this, the total increase in fuel rates is now Rs 9.20 per litre.

Notably, the price of CNG was increased by Rs 2.5 per kg yesterday. With the new price, CNG costs Rs 64.11 per Kg in the national capital.

The increase in prices has also created a political uproar as the Opposition has been staging protests and demanding a decrease in fuel prices.

The Rajya Sabha was on Monday adjourned for the day following repeated disruptions over rising prices of petroleum products and essential commodities with the Opposition protesting on the issue as their demand to hold a discussion on the matter was rejected.

DMK member Tiruchi Siva had raised a point of order, asking "why the notices given by us under Rule 267 to the Secretary-General to suspend all business of the House and conduct a discussion on hiking oil prices and many other notices were rejected".

There had been a pause in the revision of fuel prices since November 4 last year, which ended on March 22, following the crude oil prices going upwards in the wake of the Russian military operations in Ukraine.

Meanwhile, Congress is holding a nationwide protest campaign 'Mehngai Mukt Bharat Abhiyan' against price rises under which it is organising rallies and marches across the country from March 31 to April 7.

Notably, on November 3 last year, the Centre had cut excise duty by Rs 5 per litre on petrol and Rs 10 per litre on diesel to bring down the retail prices across the country.

Following this, several state governments had reduced Value-Added Tax (VAT) on petrol and diesel to provide relief to people.