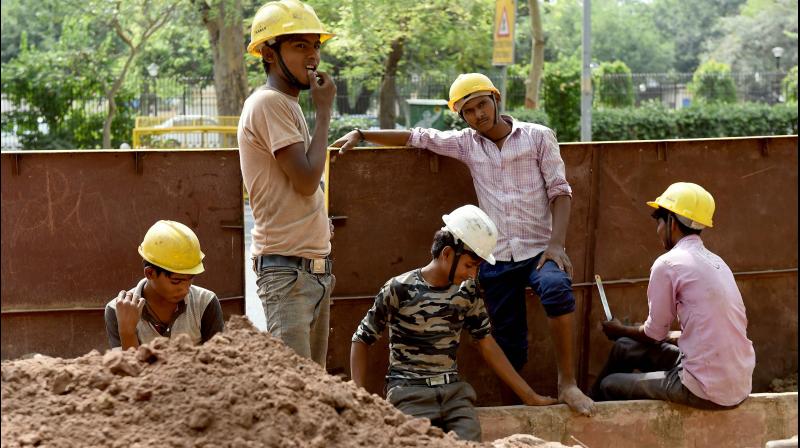 Indian labourers work at a construction site on a roadside in New Delhi. India's 2018-19 jobless rate declines to 5.8%. (AFP Photo)

NEW DELHI: India’s unemployment rate during July 2018-June 2019 period declined to 5.8% from 6.1% during a year-earlier period, a government report released on Thursday said.

Prime Minister Narendra Modi faced a political controversy last year when ahead of national elections, the first extensive annual report for the July 2017-June 2018 period was leaked and published in the Business Standard newspaper. It showed the unemployment rate was the highest in at least 45 years.

The latest annual report is based on the periodic labour force survey conducted by the National Statistics Office covering over 100,000 households in rural and urban areas.

Private economists and industry leaders say India’s unemployment rate has substantially gone up after the over two-month long lockdown imposed in late March to combat the coronavirus pandemic.

India’s unemployment rate in May rose to 23.48%, marginally lower than 23.52% in April, according to data released by the Centre for Monitoring Indian Economy (CMIE) on Monday, reflecting the impact of the coronavirus pandemic.

Asia’s third largest economy grew at a pace of 3.1% in the January-March quarter, its slowest pace in at least eight years, and economists have predicted a contraction of up to 5% in the fiscal year that began in April, posing a risk of job cuts.