Business   In Other News  05 Jun 2020  US unemployment rate seen near 20% in May as layoffs remain high
Business, In Other News

Consumer confidence, manufacturing and services industries are also stabilizing, though at low levels, hopeful signs that the worst was over 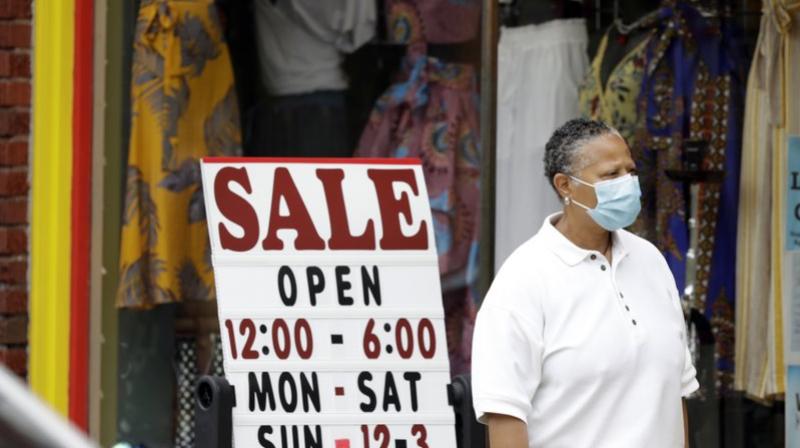 A woman walks past a boutique with a sale sign, Thursday, June 4, 2020, in Cleveland Heights, Ohio. The state says more than 34,000 Ohioans filed unemployment claims during the last week of May. That is the lowest figure since Ohio's stay-at-home orders depressed the economy and led to widespread layoffs. (AP Photo/Tony Dejak)

WASHINGTON: The U.S. unemployment rate likely shot up to almost 20% in May, a new post World War Two record, with millions more losing their jobs, exposing the horrific human toll from the COVID-19 crisis.

The Labor Department’s closely watched monthly employment report on Friday could bolster economists’ dire predictions that it would take several years to recover from the economic meltdown.

Still, May was probably the nadir for the labor market. While layoffs remained very high, they eased considerably in the second half of May as businesses reopened after shuttering in mid-March to slow the spread of COVID-19.

Consumer confidence, manufacturing and services industries are also stabilizing, though at low levels, hopeful signs that the worst was over.

“The good news is that we probably have hit the bottom,” said Sung Won Sohn, a finance and economics professor at Loyola Marymount University in Los Angeles. “But the recovery will be painfully slow. It will take years, probably a decade to get back to where we were at the end of last year.”

The employment report is compiled from two separate surveys. According to a Reuters poll of economists, the survey of households is likely to show the unemployment rate jumped to 19.8% in May from 14.7% in April, which was the highest since 1948 when the government started keeping records. The survey of establishments is forecast showing nonfarm payrolls dropped by 8 million jobs after a record 20.537 million plunge in April.

Economists are split on whether the government’s Paycheck Protection Program (PPP) is helping. The PPP, part of a historic fiscal package worth nearly $3 trillion, offers businesses loans that can be partially forgiven if used for employee pay.

Without the misclassification, the April rate would have been closer to 19%. Some economists expect the BLS addressed this problem in May, which could account for estimates for May’s unemployment rate in the Reuters survey being as high as 27%. The jobless rate neared 25% during the Great Depression of the 1930s.