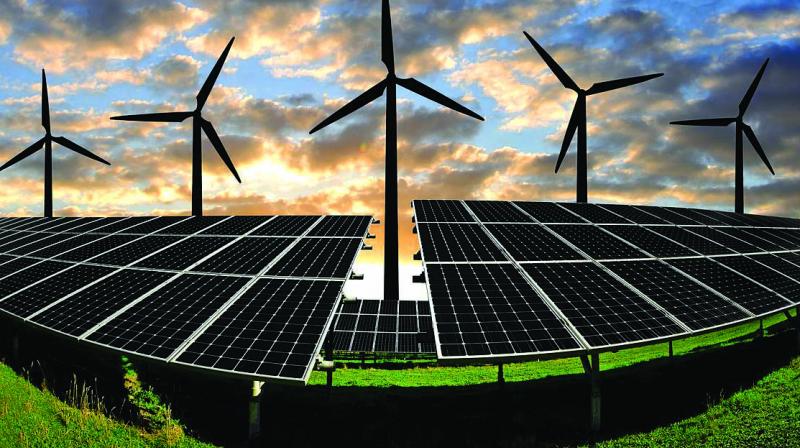 The other challenges are that thermal power plants still account for 80 per cent of all industrial emissions of particulate matter, sulphur and nitrous oxides in India.

Kolkata: Even as India nurtures a high renewable dream of reaching an overall capacity of 500 GW by 2030 (which is 40 per cent of total energy capacity), coal will remain central to its electricity generation efforts. An incremental investment of $80 billion would be required to meet its renewable goal till 2022 and another $250 billion would be required between 2023 and 2030, suggested the economic survey placed before the Parliament on Thursday.

This is notwithstanding the fact that environmentalists have already voiced concerns over India's increasing use of coal at a time when many developed countries have been discarding the dirty fossil fuel, which would hamper the global fight against climate change.

Reiterating India's commitment to renewable energy, the survey said "It may not be advisable to effect a sudden abandonment of coal based power plants without complete utilisation of their useful lifetimes as it would lead to stranding of assets that can have further adverse impact on the banking sector." The annual economic survey in fact sounded a word of caution saying that halting coal-based utilities abruptly may lead to disaster and would run the risk of destroying the stability of India's banking sector and the electricity grid.

And on the other hand, it would be difficult for a growing economy like India to migrate to renewable power supply unless "sufficient technological breakthrough in energy storage happens in the near future", it said.

Going by the economic survey, India will have to make an investment of $330 billion over the next decade to meet its renewable goal. Significantly, India wants to raise its renewable energy capacity to 500 Gigawatts (GW), or 40 per cent of total capacity, by 2030. Renewables currently account for 22 per cent of India's total installed capacity of about 357 GW.

India, which wants to have 175 GW of renewable-based installed power capacity by 2022, is the world's most important growth markets for renewable energy. And with official data indicating a growth slowdown in private and capital investments in the year ended March 2019, the investment estimate reflects the magnitude of financial challenges that the country faces.

The other challenges are that thermal power plants still account for 80 per cent of all industrial emissions of particulate matter, sulphur and nitrous oxides in India. And India, one of the world's largest coal producers and greenhouse gas emitters, estimates coal to be its energy mainstay for at least the next three decades. Mind you that India's coal use rose 9.1 per cent to nearly a billion tonne in 2018-19.