Cheque payments refuse to go in a hurry here 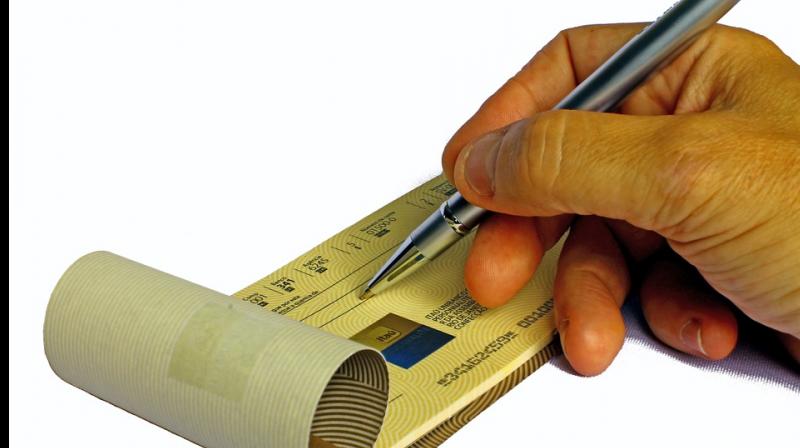 The United States of America and Brazil which had a higher volume of cheques in 2012 showed a sharper decline. (Photo: Pixabay)

Mumbai: While in most countries cheques have disappeared or are dying a slow death, in India, the rate of decline in cheque usage has been the lowest when compared to the 21 countries, said the Reserve Bank of India in its report "Benchmarking India's Payment Systems".

Though India was far behind the United States in the volume of cheques used, the decline rate in India was among the lowest,with only Turkey posing a decline lower than India (CAGR of — one per cent between 2012 and 2017). The slow decline in India between the years 2016 and 2017 happened because of a spike the use of cheques after demonetisation, said the RBI report.

India's cheque volume declined by 10.8 per cent between 2012 and 2017 at a CAGR of -two per cent. The United States of America and Brazil which had a higher volume of cheques in 2012 showed a sharper decline. In India, the year on year growth in 2016 was 10.1 per cent which can be attributed to demonetisation where all modes of payment showed an increase. 2017, however, saw a small decline of 2.9 per cent over the previous year said the central of cheque volume relative to all payment instruments was high at 7.3 per cent in the year 2017 keeping it at the bottom of the pile with respect to the countries benchmarked. However, the share reduced to 4.6 per cent in 2018-19," said the RBI.

"Across the board, cheque volumes have dropped significantly compared to all other payment instruments. We can place the examined countries into three groups: those that are close to eliminating cheques (Australia, China, Germany, Indonesia, Saudi Arabia, South Africa, South Korea, Sweden and Turkey), those that are rapidly reducing cheque usage but still have some way to go (Brazil, Canada, Italy, Singapore and United Kingdom) and those that still have high cheque usage (United States, France, Mexico and India)."

"India is steadily reducing the volume of cheques relative to all other payment instruments. In 2012, cheques made up 43.5 per cent of all India's payment systems volumes (including all debit and credit card transactions, direct debits, credit transfers and e-Money). Six years later this had dropped to 7.3 per cent. However, India still has considerable ground to cover to catch up with countries that are close to being 'cheque free' said the RBI in its report.

The report released late on Tuesday provided a comparative position of the country's payment ecosystem relative to comparable payment systems and usage trends in major countries.