Soybean had been planted over 11.27 million hecatres (ha) till recently, 0.8 per cent higher on-year, according to farm ministry data. 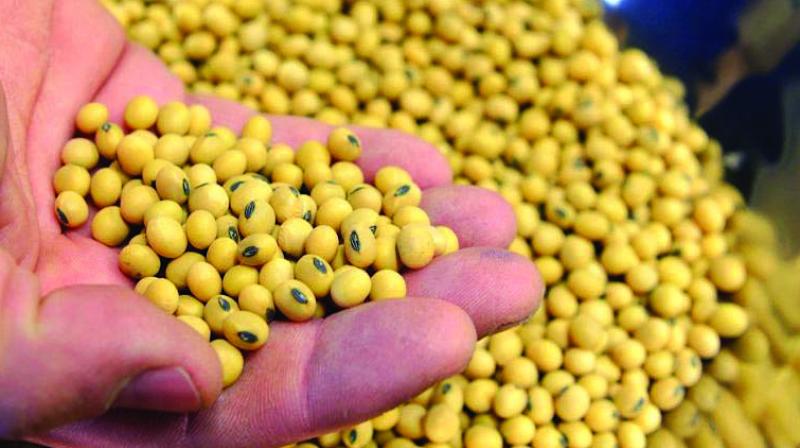 However, nearly 7 per cent of soybean acreage was under stress due to water logging and excessive rains in parts of Madhya Pradesh and Maharashtra, the Soybean Processors Association of India indicated subsequent to a crop survey.

Kolkata: Heavy rains and floods in parts of Madhya Pradesh and Maharashtra seem to have taken its toll on soybean output in the country. And further concerns over yield can be attributed to these heavy rains and flood, the improvement in acreage notwithstanding. Interestingly, higher prices of the crop during the sowing season and increase in minimum support price had prompted farmers to plant soybean over a larger area this year.

Soybean had been planted over 11.27 million hecatres (ha) till recently, 0.8 per cent higher on-year, according to farm ministry data. In Madhya Pradesh, the largest producer of soybean, the crop has been planted over 5.48 mln ha so far, up 3 per cent year on-year. In Maharashtra, it has been sown over 3.95 mn ha, up 0.8 per cent. However, nearly 7 per cent of soybean acreage was under stress due to water logging and excessive rains in parts of Madhya Pradesh and Mahara-shtra, the Soybean Proce-ssors Association of India indicated subsequent to a crop survey.

Going by a recent report from the US Department of Agriculture’s Foreign Agricultural Service (FAS), India’s soybean production for 2019-20 has been revised lower based on preliminary crop observations. Production is estimated at 10.5 mn tonnes on 11.2 mn ha. Yield will be below last year’s level of 1 tonne per hectare due to weather conditions, the FAS said. Other analysts also said that India's soybean output is likely to fall nearly 5 per cent to 10.0 mt in 2019-20 (Jul-Jun) despite higher acreage. Soybean crop estimates ranged between 9.0 mt tn and 14.0 mt for 2019-20, as against 9.5-13.8 mt for last year.

Interestingly, analysts pointed out that in soybean plants, root decay can set in, if they are submerged for days at a stretch, leading to loss of output. Mind you, soybean is the primary oilseed grown in India and accounts for 40 per cent of the country's oilseed basket. A smaller soybean crop could lead to a rise in India's edible oil imports, which were at 14.5 mt in 2017-18 (Nov-Oct). India is the world's largest importer of edible oil.

On the exports front, during the first 10 months of 2018-19, total oilmeal exports increased 8 per cent to 2.3 mt. However, soybean meal exports slid in the last four months and if the FAS report is to be believed, soybean meal are likely to stay subdued through September 2019, thanks to poor demand from overseas markets and uncompetitive pricing.

According to the data compiled by the Solvent Extractors’ Association of India (SEA), the overall export of oilmeals during April-August, 2019 was reported at 1,016,682 tonne, 23 per cent down compared to 1,326,626 tonne shipped during April-August 2018. And this can be attributed to higher prices of domestic soybean meal, thanks to higher MSP of soybean. This makes the domestic oilmeal expensive in the international market compared to other origins.

Analysts say increased production of India's main summer-sown oilseed could eventually help the country bring down costly purchases from Brazil, Argentina, Indonesia and Malaysia. It could also help boost Indian exports of animal feed  ingredient soymeal to countries like Bangladesh, Japan, Vietnam and Iran. In fact, Soybean prices have also been buoyed by growing Iranian appetite for imports of Indian soymeal, they said.