Business   In Other News  09 Nov 2018  Note ban had impact on black money: Justice Shah
Business, In Other News

Many economists and experts are not convinced by the arguments for demonetisation, says justice MB shah. 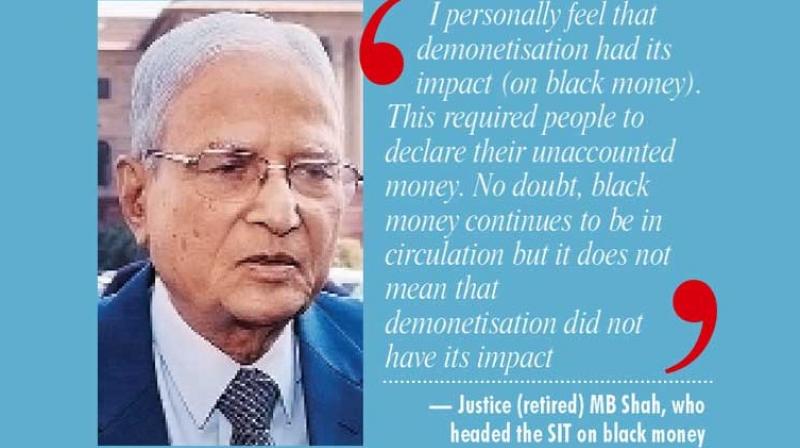 New Delhi: Demonetisation had its impact on containing black money but the government now needs to immediately put cash holding limit on companies and individuals to clean up the system, said justice (retired) MB Shah, who headed the SIT on black money.

Acknowledging the prevalence of black money in high value transactions such as house purchase and land after two years of note ban, Shah said the upper limit for cash holding should be Rs 1 crore.

Asked what step government should take next to curb black money, he said there should be limit on holding cash. “The income tax authorities seize huge amounts of cash but people find ways and means to show that all cash does not belong to them. There should be law to provide for forfeiting cash above Rs 1 crore (or maximum permissible limit) to the government,” the former chief of the Supreme Court-appointed panel noted.

“There is no doubt that black money continues to be a major component in real estate. While buying agricultural land, people are using black money and understate the actual market value. The government has taken steps to contain black money but people have found ways to keep unaccounted money,” said justice Shah.

Restricting cash holding was one of the recommendations of justice Shah to stifle the flow of black money in the economy but the government is yet to act on the proposal. Some of the policy makers hold that the idea may not be practically possible as policing of it would be difficult. Further, there are MNCs and big corporate companies with multiple offices in one location and they may need cash for dealing with emergencies like medical, fire and other issues.

“Not for individuals but for corporates there is already a requirement of recording all the cash in their registers. Anyways, I don’t find the idea of restricting cash holding very practical,” said a tax expert.

Many economists and experts are not convinced by the arguments for demonetisation and maintain that it hardly made any difference. They feel the move damaged the economy more than benefitting it.

“At the time of demonetisation the government had hoped that Rs 2-3 lakh crore worth of currency would not come back to the system as they were ill-gotten wealth but almost all the old currency were deposited in banks,” said an expert wishing not to be named.