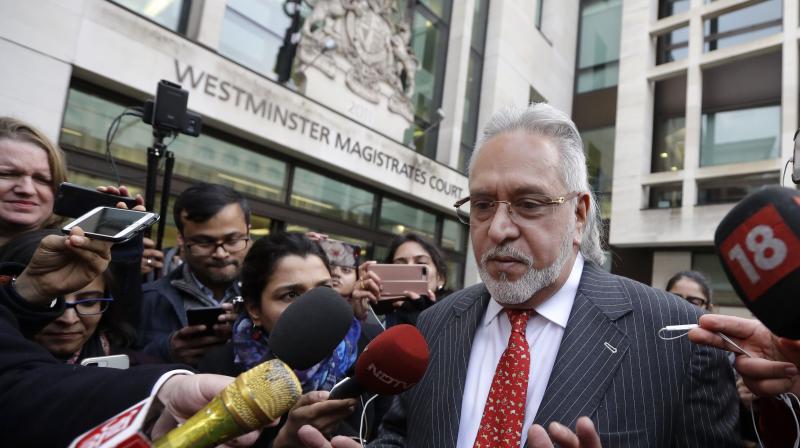 High Court in London has deferred hearings on a plea by the SBI-led consortium of Indian banks. (AP Photo)

London: In a relief to liquor baron Vijay Mallya, the High Court in London has deferred hearings on a plea by the SBI-led consortium of Indian banks, seeking the indebted tycoon to be declared bankrupt to enable them recover a loan of around 1.145 billion pounds from him.

Justice Michael Briggs of the insolvency division of the High Court granted relief to Mallya, ruling that he should be given time till his petitions to the Supreme Court of India and his settlement proposal before the Karnataka High Court be determined, allowing him time to repay his debts to the banks in full.

Chief Insolvency and Company Court judge Briggs, in his verdict delivered Thursday, said there is no obvious advantage to the banks to pursue this class action at this point in time.

This bankruptcy petition is by any measure extraordinary. The banks are pressing for a bankruptcy order at a time when there are extant proceedings in India, read the judgment.

In my judgment the banks are secured, at least in part The hearing of the petition should be adjourned for the purpose of amendment and for time to pay the debts in full, it noted.

A consortium of Indian public sector banks led by the State Bank of India had sought a bankruptcy order against Mallya as part of efforts to recoup around GBP 1.145 billion of unpaid loans from Mallya.

Judge Briggs had reserved his judgment after hearing arguments from both sides in December last year over the loans to Mallya's now-defunct Kingfisher Airlines.

In his judgment, the judge concluded that the legal cases being pursued by Mallya in India stood a reasonable prospect of success.

Although the petition to the Supreme Court and proposal before the Karnataka High Court are not guaranteed to succeed, they are genuine. The evidence supports the view that the petitions stand a reasonable prospect of success, he said.

According to the court document, the judgment on the bankruptcy petition was produced in December last year and circulated in January this year but its handing-down was adjourned for further argument at the request of the parties.

Meanwhile, Mallya remains on bail pending a UK High Court ruling in the extradition proceedings brought by India in relation to charges of fraud and money laundering amounting to an alleged Rs 9,000 crores.