It has also been approached to build a bridge replacing a collapsed one at Siliguri. 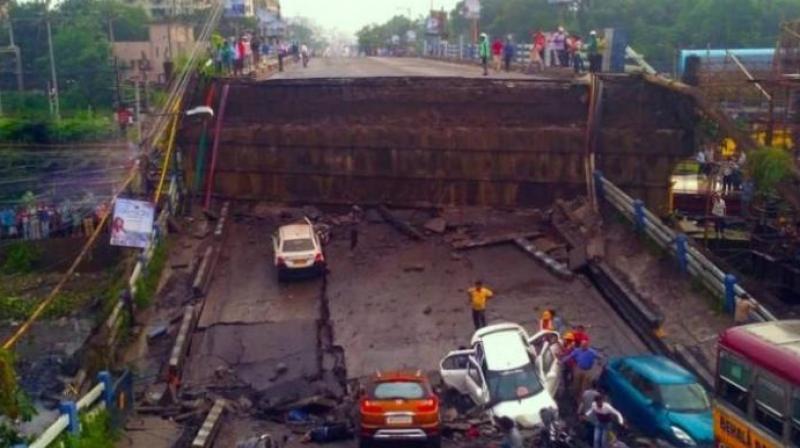 IPO-bound Garden Reach Shipbuilders and Engineers (GRSE) on Wednesday said its help has been sought by West Bengal government to build a bridge at Majerhat, after last month's collapse that killed one person.

Mumbai: IPO-bound Garden Reach Shipbuilders and Engineers (GRSE) on Wednesday said its help has been sought by West Bengal government to build a bridge at Majerhat, after last month's collapse that killed one person.

It has also been approached to build a bridge replacing a collapsed one at Siliguri and is in touch with authorities in flood-hit Kerala for building bridges, its chairman and managing director, Rear Adm (Retd) VK Saxena told reporters here. "We see orders by state governments and other civilian agencies to build bailey bridges as a major opportunity. West Bengal government has approached us to help them build a bridge at Majerhat in 10-15 days," he said.

He elaborated that the plan is to build two bridges, one each catering to traffic in one direction and the GRSE is in talks with the government for building one quickly before the Durga Puja festivities.

No contract has been signed yet and the price for the construction is yet to be negotiated, he said. This will be the second bridge to be built by the defence public sector undertaking after building the foot overbridge that came up at suburban Elphinstone Road last year, he said.

Apart from bridges, the shipyard is planning to concentrate on ship repairs and refitting and exports in a major way, he said. At present, over 95 per cent of its Rs 20,300 crore order book is from the Indian Navy won without competitive bidding. The government is selling 25 per cent of its holding in the Kolkata-headquartered company through an offer for sale, through which it expects to raise over Rs 335 crore.

The initial public offering (IPO) issue will be open for three days starting September 24. Adm Saxena said a public listing will help the shipyard be more efficient in its operations. It will be delivering 15 vessels to the Navy by end of next year, he said, adding that the three project-17 alpha vessels will be delivered by 2023. It will be bidding for all the future projects that the Navy will be coming up with, he said.