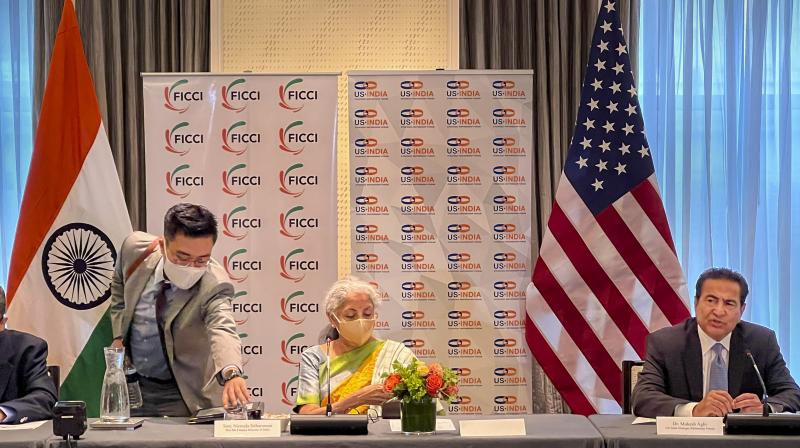 Boston: Institutions such as United Nations, World Bank and International Monetary Fund need to be urgently reformed as they no longer speak for countries whose issues have remained unattended to for decades, Finance Minister Nirmala Sitharaman said.

All these organizations will have to look at reforming themselves, she said here at Harvard Kennedy School on Tuesday.

During the conversation with Professor at Harvard University Lawrence Summers at the talk organized by the Mossavar-Rahmani Center for Business and Government, Sitharaman said while reforms in countries are happening in different stages, these global institutions have remained the way they have been for the last several decades.

Many of them now no longer speak for countries whose issues have remained unattended to for decades together, whether it is on trade, security, monetary framework and on funding development, she stated.

There is a desperate need for all these institutions to be more transparent, represent and speak for countries which don't get adequate representation; and therefore I would think that is something which has to happen immediately.

When these institutions become more representative, she said there would be more equitable distribution of resources, more concern for equitable development for growth. This whole dialogue which used to happen - north-south - looked as if it's moving towards irrelevance.

But the issues of north-south still remain. Development has not reached many parts of Africa, many parts of the small Pacific islands. Many parts of those countries, even within countries, where there is differentiated development. So I think that's what would have happened if only this reform agenda had been taken up by these institutions, she said.

Sitharaman arrived in the US Monday for a week-long trip to attend the annual meet of the World Bank and IMF in Washingon as well as G20 Finance Ministers and Central Bank Governors (FMCBG) meeting. During the official visit to the US, Sitharaman is expected to meet US Treasury Secretary Janet Yellen.

She said that participating in the G-20 now for India has got its own importance. India has joined the trio, which refers to the Chair of the G-20, and the one before and the Chair after the current President.

India will hold the G20 presidency from December 1, 2022, and Sitharaman said that whole year, India will work to take the G-20s agenda forward.

She said the G20 meeting for her will be also a process of learning how the current presidency is taking the agenda forward.

More importantly, the OECD has been working in the much discussed global tax or tax on these huge big multinationals so that this practice which is now prevalent that they end up paying tax nowhere.

They're neither paying the country where they're doing business and earning the profit, nor are they paying tax in the country where they are located, she said, adding that the current each country for itself' taxation regime has given them an opportunity to end up paying nowhere, which is good for the company, but absolutely of no use for countries where the business is getting generated.

Today, more than 134 countries have come together to have a global tax on all those companies which are operating across nations, making the profit across nations profits in so many geographical jurisdictions, but end up paying no tax in both jurisdictions.