Business   In Other News  14 Jul 2020  India's June retail inflation picks up after easing of lockdown
Business, In Other News

India's June retail inflation picks up after easing of lockdown 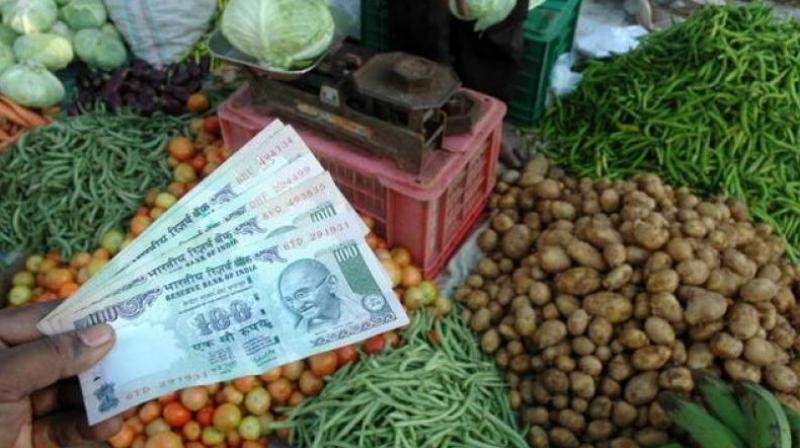 India’s retail inflation picked up in June, pushed by price increases for some food and fuel items. (PTI Photo)

NEW DELHI: India’s retail inflation picked up in June, pushed by price increases for some food and fuel items, but economists said the central bank could still ease rates because of concerns about economic slowdown caused by lockdown.

Annual retail inflation rose to 6.09% in June, compared to 5.84% in March, and 5.30% forecast in a Reuters poll of economists.
Related Coverage

June’s inflation remained above the mid-point of the Reserve Bank of India’s 2-6% target range, the Ministry of Statistics data showed on Monday.

The government had suspended the release of CPI inflation headline numbers for April and May due to insufficient data during the lockdown period.

Some economists expressed fear of rising price pressures amid lockdown, but said the central bank could still ease interest rates further after cutting repo rate by 115 basis points since March, in addition to providing liquidity support to address damage to the economy caused by the pandemic.

“Going ahead, as coronavirus led restrictions slightly recover and as supply crunch reduces, we may see CPI falling below 6%,” he said.

Annual food inflation eased to 7.87% in June from a downwardly revised 9.20% in May, the data showed, and is expected to slow down in coming months amid good rainfall in many parts of the country.

The International Monetary Fund has predicted Asia’s third largest economy could contract 4.5% in the current financial year beginning in April, from an earlier forecast of 1.9% growth.

The medium-term outlook for the Indian economy remains uncertain with supply chains and demand yet to be restored fully while the trajectory of the coronavirus spread and the length of its impact remain unknown, Reserve Bank of India (RBI) Governor Shaktikanta Das said on Saturday.