Business   In Other News  22 Jan 2019  Kumbh 2019: NGO treats people with physical deformities for free
Business, In Other News

Narayan Seva Sansthan is operating its camp in sector 14 of the Kumbh Mela to treat people with physical issues by birth. 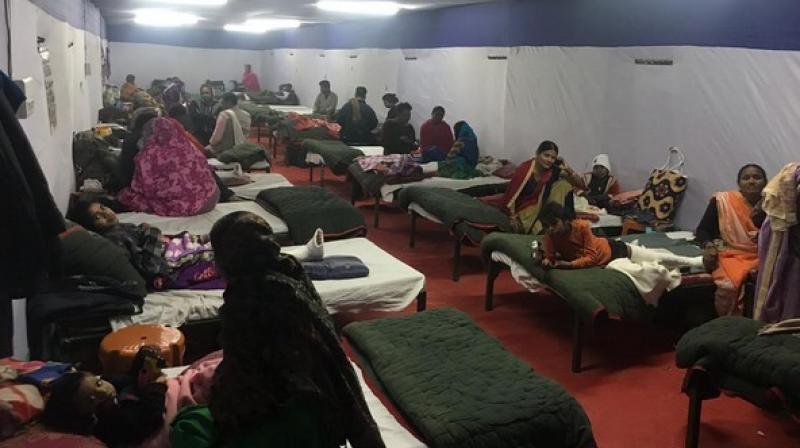 The NGO aims to rehabilitate the differently-able people. (Photo: ANI)

Prayagraj: As Kumbh Mela in Prayagraj is gaining momentum and attracting lakhs of people across the world every day, a non-profit organisation called 'Narayan Seva Sansthan' is doing their bit towards mankind by treating people with physical deformities free of cost.

Narayan Seva Sansthan is operating its camp in sector 14 of the Kumbh Mela to treat people with physical issues by birth. It is inviting patients around the area of Prayagraj Kumbh to get treated.

Narayan Seva Sansthan is a charitable organisation based in Rajasthan's Udaipur. It is known for providing philanthropic services in the field of treatment and rehabilitation of polio-affected people without discrimination of religion, region, caste, or gender.

The NGO aims to rehabilitate the differently-able people. This is their fourth time in the Kumbh.

The organisation has claimed to cater to people who are ailing with polio, cerebral palsy and other physical deformities.

Sansthan has set up a surgical and spiritual camp in ongoing Kumbh Mela along with artificial limb development workshop. To cater the demand inspired by Kumbh, the NGO has set up a 100-bed hospital.

Dr Amar Singh Chundawat told ANI, "10 per cent of the population is disabled and if they are made to work properly then they will be an asset to the country."

The Kumbh Mela is a display not only for the Indians but also foreign tourists who come from all across the world to witness the event.

The 55-day long Kumbh Mela, which began on January 15, will end on March 4. It is the largest human congregation in the world, with over 130 million pilgrims expected to participate in the festival with the belief that taking a dip in the holy water of Ganges River will pave the way for their salvation and would rid them of their sins.