Business   In Other News  22 Sep 2020  Onion export ban to cause Rs 5,000 crore losses to Maharashtra farmers
Business, In Other News

Growers in Maharashtra had stored up around 27 lakh tonnes of onion, of which 60 per cent stock remains 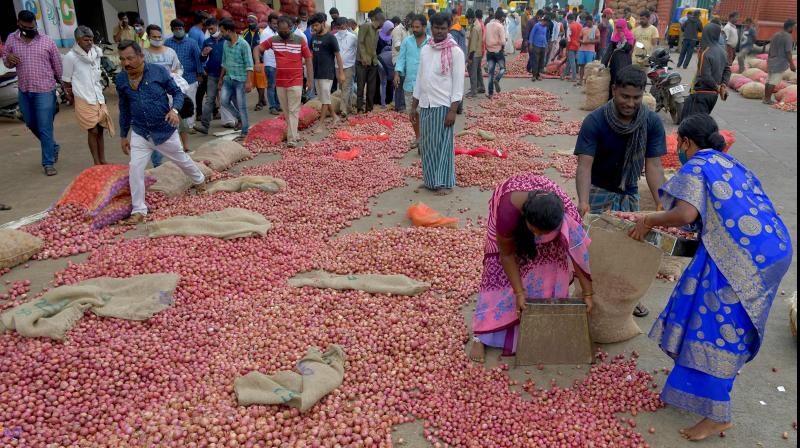 Maharashtra farmers are likely to suffer huge losses of over Rs 5000 crore owing to Centre’s decision to ban the export of onions. The move is likely to benefit China and Pakistan in the international market, said agriculture experts.

At the end of the summer harvest season, growers in Maharashtra had stored up around 27 lakh tonnes of onion, of which 60 per cent stock remains. After the ban was announced, truckloads of onions have been stranded at several places like Nashik, Pune, Nagar and Solapur. The produce is likely to be damaged due to the ban causing loss to exporters as well as farmers.

According to the experts, the ban has come at a time just when the onion prices had started rising after remaining low for several months. The average trade rate, which was Rs 20 per kg in July, in the country’s biggest onion market at Lasalgaon had now touched Rs 35 per kg and was expected to go up further. Maharashtra is the largest onion producing state in the country.

Last year, the delayed monsoon had caused heavy damages to the onion crop. The farmers also initially witnessed difficulties to export onion due to the coronavirus pandemic. But the export was later streamlined and in the last eight months, nearly 16 to 17 lakh tonnes of onion was exported.

Last week, the central government’s department of commerce decided to ban the export of onions. The move came as a surprise as the government usually takes the step when prices shoot up and supply remains weaker. But this year, the country has seen a bumper onion crop.

NCP President Sharad Pawar has already warned that the decision could allow other countries like Pakistan to displace India in the international market. “The ban jeopardizes India's export share in the onion markets of Gulf countries, Sri Lanka and Bangladesh,” he said.

The decision to ban export of onions is utterly foolish, said Raghunathdada Patil, president of Shetkari Sanghatana. The country was getting invaluable foreign exchange through the onion export during the present economic crisis. But the move will now benefit China and Pakistan, he said.