Govt is in the process of appointing the chief economic advisor (CEA) who could soon take charge. 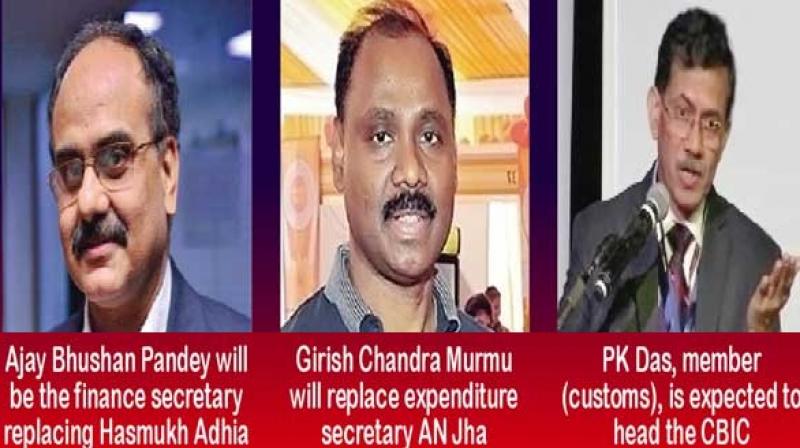 A new look team would soon be in place at North Block to prepare Modi government’s Interim Budget ahead of the general elections next year.

New Delhi: A new look team would soon be in place at North Block to prepare Modi government’s Interim Budget ahead of the general elections next year.

Among the fresh faces would be Ajay Bhushan Pandey, chief executive officer (CEO) of UIDAI and chairman of Goods and Services Tax Network (GSTN). He would succeed present revenue secretary Hasmukh Adhia -- considered the prime minister’s key lieutenant in framing economic policies -- who is retiring on November 30. Pandey, a 1984-batch IAS officer of the Maharashtra cadre, will hold additional charge of UIDAI CEO and GSTN chairman.

Girish Chandra Murmu, the 1985-batch Gujarat-cadre IAS officer who is presently special secretary at revenue department, would be the new expenditure secretary after incumbent Ajay Narayanan Jha's superannuation on January 31, 2019. The present economic affairs secretary Subhash Chandra Garg will be at the helm of Budget-making exercise, as he will become finance secretary after Jha retires.

The two other top bureaucrats — banking secretary Rajeev Kumar and department of investment and public asset management (DIPAM) secretary Atanu Chakraborty — would remain the key faces behind setting the government's economic agenda for the next financial year.

Finance minister Arun Jaitley is expected to present the Interim Budget 2019 on February 1.

Official sources said the government is in the process of appointing the chief economic advisor (CEA) who could soon take charge. The office of the CEA is lying vacant after Arvind Subramanian resigned from the position to return to academic research in the US.

The top indirect tax authority Central Board of Indirect Taxes and Customs (CBIC) would also have a new boss as the current chairman S Ramesh is set to retire by this year-end. PK Das, member (customs), is expected to head the CBIC, which, along with state commercial tax authorities, administers and collects GST. Sushil Chandra, chief of Central Board of Direct Taxes (CBDT), would, however, continue to be a part of the Budget team, along with principal economic adviser Sanjeev Sanyal.