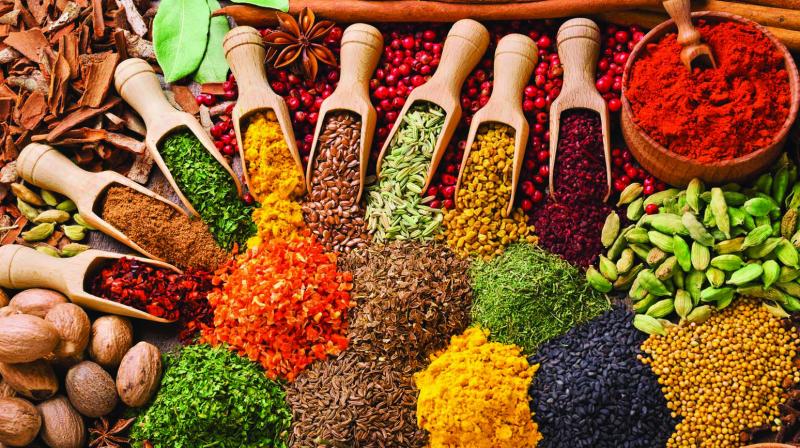 India exported about 7.97 lakh tonnes of spices and spice products worth Rs 13,167.89 crore during April-December 2017, an increase of 20 per cent in volume and four per cent in Rupee terms.

Thiruvananthapuram: India exported about 7.97 lakh tonnes of spices and spice products worth Rs 13,167.89 crore during April-December 2017, an increase of 20 per cent in volume and four per cent in Rupee terms.

In Dollar terms, spices exports were pegged at USD 2041.23 million as compared to US$ 1880.02 million, notching an increase of nine per cent in value.

Large shipments of small cardamom, known as the 'Queen of Spices', cumin, garlic, asafoetida, tamarind and other seeds (ajwain or Bishop's weed, mustard, dill and poppy seed) propelled an increase both in volume and value.

The export of value added products like curry powder, mint products, spice oils and oleoresins also increased in volume and value while export of chilli, coriander, fennel and nutmeg and mace registered an increase in terms of volume only.

"India has been able to sustain the demand for its trademark spices in international markets in the face of stiff competition and stringent food safety regulations that now define the international commodity trade," said Spices Board Chairman Dr A Jayathilak.

Exports of spices like chilli showed a decrease in value despite increase in export volumes, he said, attirubuting it to volatility in international spices trade.

Though Indian spices have become a trusted global brand, there is an imperative need to give a huge impetus to value added products and sustain their quality and flavour, he said.

But it was small cardamom that registered maximum export growth both in terms of value and volume during the period.