The global trade body said that in the first quarter, the volume of merchandise trade shrank by 3% year-on-year. 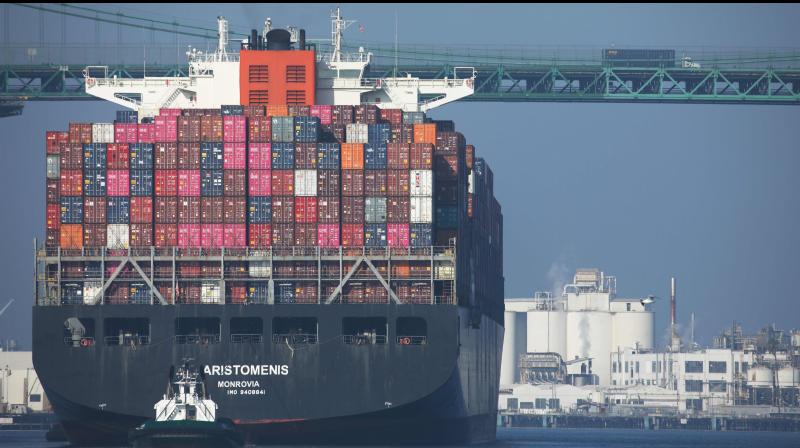 Global trade is expected to drop around 18.5 percent year-on-year in the second quarter of 2020. (AFP Photo)

GENEVA: Global trade is expected to drop around 18.5 percent year-on-year in the second quarter of 2020 in a huge coronavirus-driven plunge which nonetheless could have been much worse, the WTO said Tuesday.

"Initial estimates for the second quarter, when the virus and associated lockdown measures affected a large share of the global population, indicate a year-on-year drop of around 18.5 percent," the World Trade Organization said in a statement.

The global trade body said that in the first quarter, the volume of merchandise trade shrank by three percent year-on-year.

Giving its initial estimates for the second three months of the year,the expected drop of 18.5 percent was better than the WTO's worst predictions.

"The fall in trade we are now seeing is historically large -- in fact, it would be the steepest on record. But there is an important silver lining here -- it could have been much worse," said outgoing WTO director-general Roberto Azevedo.

"This is genuinely positive news but we cannot afford to be complacent."

In its annual trade forecast issued on April 20, the WTO forecast volumes would contract by between 13 percent at best and 32 percent at worst in 2020.

"As things currently stand, trade would only need to grow by 2.5 percent per quarter for the remainder of the year to meet the optimistic projection," the WTO said.

"However, looking ahead to 2021, adverse developments, including a second wave of COVID?19 outbreaks, weaker than expected economic growth, or widespread recourse to trade restrictions, could see trade expansion fall short of earlier projections."

Azevedo said policy decisions had softened the ongoing blow and would help determine the pace of economic recovery from the crisis.

"For output and trade to rebound strongly in 2021, fiscal, monetary, and trade policies will all need to keep pulling in the same direction," said the Brazilian career diplomat, who is leaving his post a year early at the end of August.