Business   In Other News  24 Mar 2021  One year since COVID-19 lockdown: India still recovering from unemployment blow
Business, In Other News

The CMIE data showed that the unemployment rate had risen to 9.1 per cent in December 2020 and improved in January to 6.5 per cent 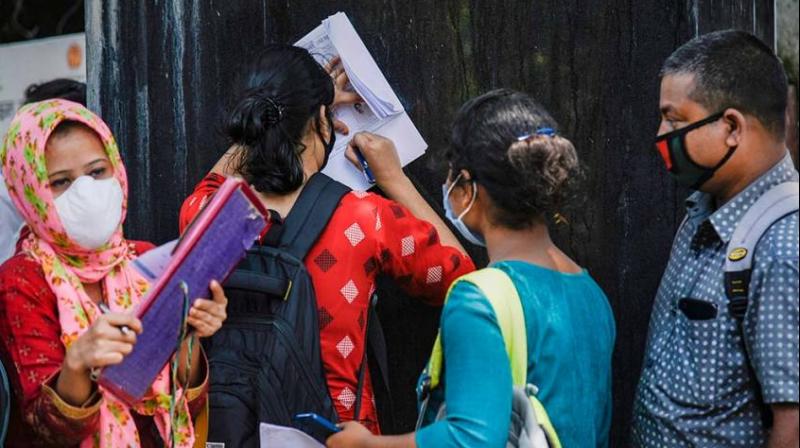 According to the Centre for Monitoring Indian Economy (CMIE) data, the unemployment rate was recorded at 6.9 per cent in February 2021 which is slightly better than 7.8 per cent in the same month last year and 8.8 per cent in March 2020, during which lockdown was imposed. (Representational image: PTI file photo)

New Delhi: India is still not out of the woods as far as unemployment is concerned after a year when the lockdown was imposed to contain the spread of deadly COVID-19 on March 25 last year as pandemic-induced job loss has not tapered off consistently.

The government had imposed a lockdown to curb the spread of the pandemic but this impacted economic and commercial activities and resulted in job loss and later on the exodus of migrant workers which rocked the entire nation.

According to the Centre for Monitoring Indian Economy (CMIE) data, the unemployment rate was recorded at 6.9 per cent in February 2021 which is slightly better than 7.8 per cent in the same month last year and 8.8 per cent in March 2020, during which lockdown was imposed.

The data showed that the unemployment rate had peaked to 23.5 per cent in April and remained at 21.7 per cent in May. It started tapering off from June onward when it was recorded at 10.2 per cent in the month and further improved to 7.4 per cent in July.

However, the unemployment rate again rose slightly to 8.3 in August and improved to 6.7 per cent in September last year, as per CMIE data.

In October, unemployment again rose slightly to 7 per cent and then eased to 6.5 per cent in November last year as per the data.

The CMIE data showed that the unemployment rate had risen to 9.1 per cent in December 2020 and improved in January to 6.5 per cent.

Experts said that the CMIE data indicated improvement in the unemployment scenario from July onwards, but there is a need for consistency which would only come after an increase in buoyancy in the manufacturing and services sectors.

They were of the view that the farm sector has done well which engages over 55 per cent of the country's population but there is a need for improvement in hiring in urban and industrial areas.

They opined that the government has taken many steps to boost fresh hiring in the country but repeated policy interventions and monitoring of existing schemes and initiatives at the ground level are required to achieve consistent improvement in the employment scenario in the country.

According to labour ministry data, around 16.5 lakh people have benefited from the Aatmanirbhar Bharat Rozgar Yojana (ABRY) which was launched in October to encourage hiring in the country amid the COVID-19 pandemic till March 9, 2021.

The scheme was introduced on October 1, 2020, to incentivise the creation of new employment along with social security benefits and restoration of loss of employment during the pandemic.

This scheme, being implemented through the Employees Provident Fund Organisation (EPFO), reduces the financial burden of the employers of various sectors/ industries and encourages them to hire more workers.

The experts said that the government intends to create 50 lakh to 60 lakh jobs through the ABRY in two years' time, but it required close monitoring and well-planned implementation to achieve the desired objective.

Under Pradhan Mantri Garib Kalyan Yojana (PMGKY), Government of India has contributed both 12 per cent employer's share and 12 per cent employee's share under Employees Provident Fund (EPF), totaling 24 per cent of the wage for the wage month from March to August 2020, for the establishments having up to 100 employees with 90 per cent of such employees earning less than Rs 15,000.

Under the PMGKY scheme, Rs 2,567.66 crore was credited in EPF accounts of 38.82 lakhs eligible employees.

The recently released latest EPFO payroll data showed that net new enrolments with the retirement fund body grew about 28 per cent to 13.36 lakh in January compared to the same month in 2020.

The data also reflected a growth of 24 per cent for January 2021 over December last year.

The EPFO has added around 62.49 lakh subscribers during the first ten months of the ongoing fiscal year, the data showed.

The EPFO payroll data also gives a perspective about the employment scenario in the country.