Business   In Other News  24 Aug 2019  Omni-channel trade set to take off with Future deal
Business, In Other News

Omni-channel trade set to take off with Future deal

Amazon to get access to 1,600 stores under Future brands. 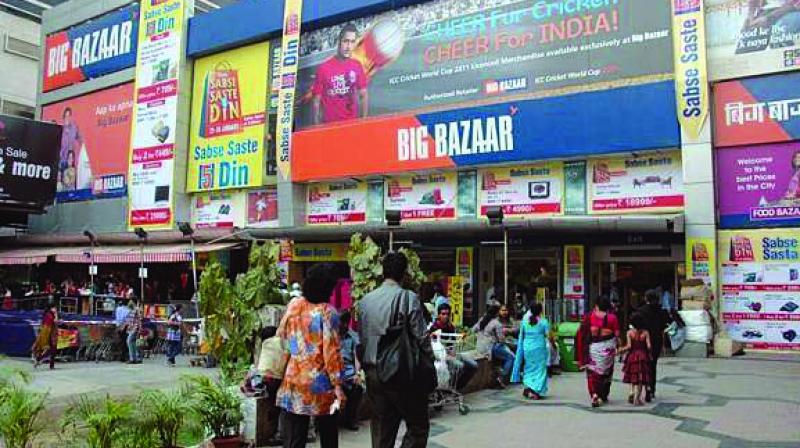 It also has the option to acquire another 47.02 per cent stake in Future Retail in the future.

Chennai: Omni-channel trade is set to take off in the market as the biggies in physical retail and e-commerce get into a triangular fight. Amazon and Future group have joined hands to give a tough fight for the Walmart-Flipkart combine and Reliance, which is devising a major omni-channel strategy.

“While at this juncture we are not sure of the exact valuation at which Amazon will pick stake in Future Retail, our base assumption is that balance Rs 1500 crore which Future Coupons was to infuse is the quantum that Amazon would have infused. Factoring this, we arrive at an implied acquisition price of Rs 773, a 53.2 per cent premium to the warrant conversion price of Rs 505,” said Abneesh Roy, Executive Vice President, Institutional Equities, Edelweiss Securities.

The valuation of Future Retail has doubled to Rs 42,000 crore with this transaction against the current market cap of Rs 21,000 crore.

As part of the deal agreement, Amazon will have a call option to acquire all or part of the promoters' shareholding in Future Retail of 47.02 per cent between the third and tenth year of the transaction and it will be subject to law. In future, Amazon can own 47.02 per cent in Future Retail apart from 3.6 per cent through Future Coupons.  Amazon had to take an indirect route through Future Coupons due to the current FDI rules for e-commerce entities.

With this partnership, Amazon will get access to around 1600 stores of Future Retail under Big Bazaar, Easy Day, Nilgiris and Heritage brands and will help shorten the delivery time, especially in case of fresh food and grocery.  Future Retail has started piloting its omni-channel through its NCR stores. FRL will benefit from Amazon’s cutting edge technology platform, analytics as well as sector knowledge and expertise, said Roy. Amazon will also provide a strong sales channel for Future Consumer’s private label products and Future Lifestyle Fashion’s apparels.

Further, the transaction will help Future Group prune its pledged shares over a period of time. Future Retail, Future Lifestyle Fashion and Future Consumer have 51.5 per cent, 26.4 per cent and 61.1 per of their promoters shares pledged.

With this deal, omni-channel will get big push in Indian retail market. After buying Flipkart,Walmart is also looking at having a partnership with a physical retail chain. Relaince on the other hand has a wide network of retail stores, a strong telecom network under Jio and is looking at joining hands with kirana stores for its omni-channel trade.