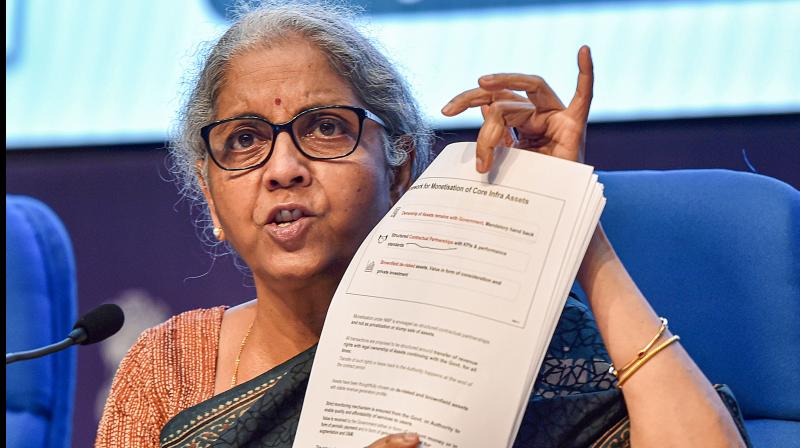 Up to Rs 5,000 crore of financial assistance is already budgeted as 50-year interest-free loan for the states for the current year, she said. — PTI

New Delhi: Finance minister Nirmala Sitharaman on Monday announced a Rs 6-lakh crore worth National Monetisation Pipeline (NMP) plan on Monday, listing out the government's infrastructure assets to be sold over the next four years. Projects have been identified across sectors, with roads, railways and power making up the top three segments. Also, states will be incentivised to monetise public sector assets, with 30 to 100 per cent interest-free loan assistance, depending on the monetisation mode.

Sitharaman clarified that the NMP plan does not mean "selling land", instead it talks about brownfield assets where investment is already being made and where there are assets either languishing or not fully monetised or under-utilised.

"For those who have this question in mind—are we selling away the lands? No. The NMP is talking about brownfield assets that need to be better monetised. By bringing in private participation, we are going to monetise it (assets) better and with whatever resource that you obtained by monetisation, you are able to put in further investment into infrastructure building," she said while launching the mega NMP plan here.

As per the Niti Aayog, the NMP plan would serve as a medium-term road map for the government's asset monetisation initiative.

Elaborating, Sitharaman, said, "The ownership of assets remains with the government. There will be a mandatory hand-back. They (private sector partners) will have to give it back after a certain time. Also, by bringing in private participation, the government is going to monetise its assets better."

The finance minister further said the Centre will also incentivise states to monetise their public assets. "The incentives will be given by the Centre to states as 50-year, interest-free loans. Up to Rs 5,000 crore of financial assistance is already budgeted as 50-year interest-free loan for the states for the current year," she said.

The FM also conveyed that this year's Budget had identified infrastructure as a key focus for spending.